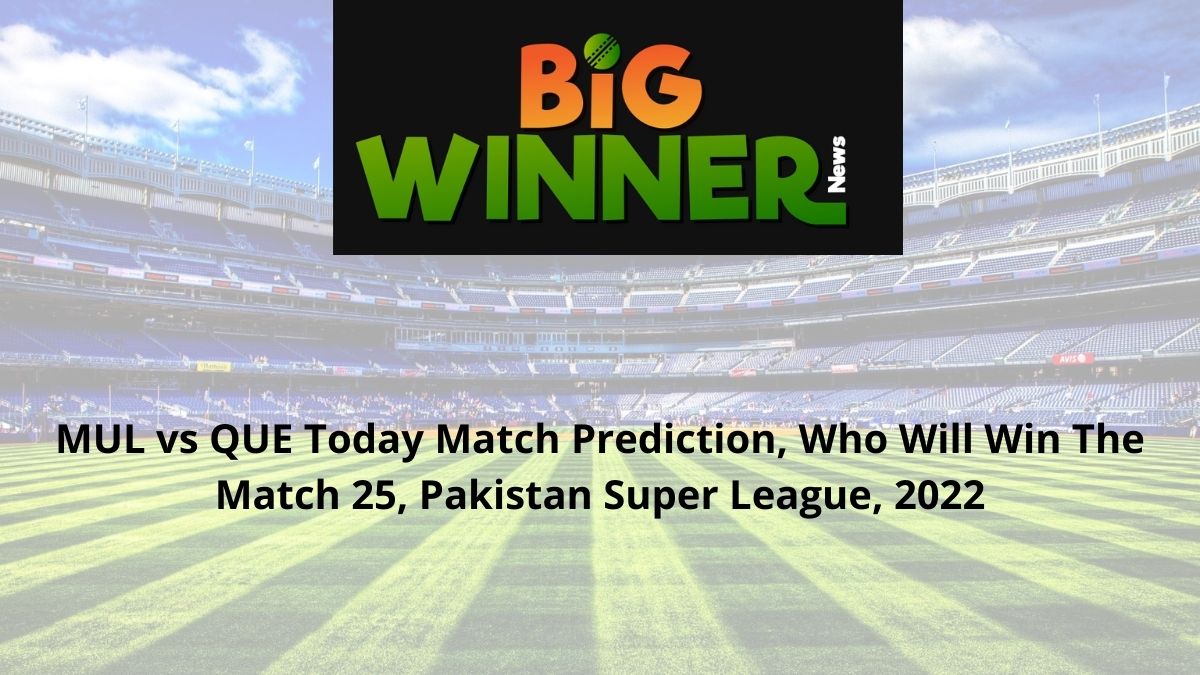 Our Experts bring you the finest today’s match prediction that you can trust. We are here for MUL vs QUE, Today Match Prediction, Match 25, Pakistan Super League, Online Cricket Betting Tips, which will provide every user with a clear picture of which team and in what aspect they can place their bets.

Multan Sultans defeated Karachi Kings by 7 wickets in the last match with just 3 balls remaining and secured the top-two finish for themselves. They can secure top-position with another win on Friday and odd are with them to lift the PSL 2022 trophy as well.

Quetta Gladiators started this season with consistently high performances but defeats in last two matches have hampered their chances to finish this season in top-four. They suffered a 25 runs defeat against Peshawar Zalmi in the last match and missed to occupy 4th position. Now they are placed in 5th position with 6 points and another defeat on Friday will surely finish their hopes for the qualifier spot.

The temperature is expected to hover around 22°C on the match-day with 48% humidity and 08 km/h wind speed. There are 12% chances of precipitation during the game.

We have witnessed teams crossing average score in the both innings at both Karachi and Lahore pitches this season. Lahore pitch is balanced for both batsmen and bowlers in the past but batsmen are dominating this pitch this year.

Multan Sultans are expected to win against Quetta Gladiators

Multan Sultans returned to the winning ways as soon as possible win an impressive win against Karachi Kings in the last match. Gladiators are struggling for consistency this season and occupy second-last place in the table with 6 points. A defeat on Friday will definitely end their chances to reach the qualifier with just a match remaining after this clash.

Both openers Mohammad Rizwan and Shan Masood are scoring runs just for fun and occupy 2nd and 3rd position in the most-wickets charts in this tournament. Rizwan scored 76 runs in the last match and total 345 runs in 8 matches with average of 49.28 and a strike rate of 126.83.

The English explosive opener missed the century against the Zalmi by 1 run in the last match after scored 99 runs off 60 balls. Smeed has scored 229 runs in just 4 matches with an average of 57.25 and a strike rate of 141.35.

The experienced South African legendary spinner is leading most wickets charts alongside Khushdil Shah for the Sultans. He has taken 13 wickets in this tournament, just 4 wickets behind highest wickets-taker Shadab Khan, with an average of 17.15 and an economy rate 6.96.

The 19-year-old making strides in test cricket with his pace and swing with national side but now enjoying excellent spell in PSL 2022 this year. He is leading most-wickets charts with 11 wickets in 8 matches, including 4 wickets in the last match, with an average of 22.81 and an economy rate 8.32 so far.