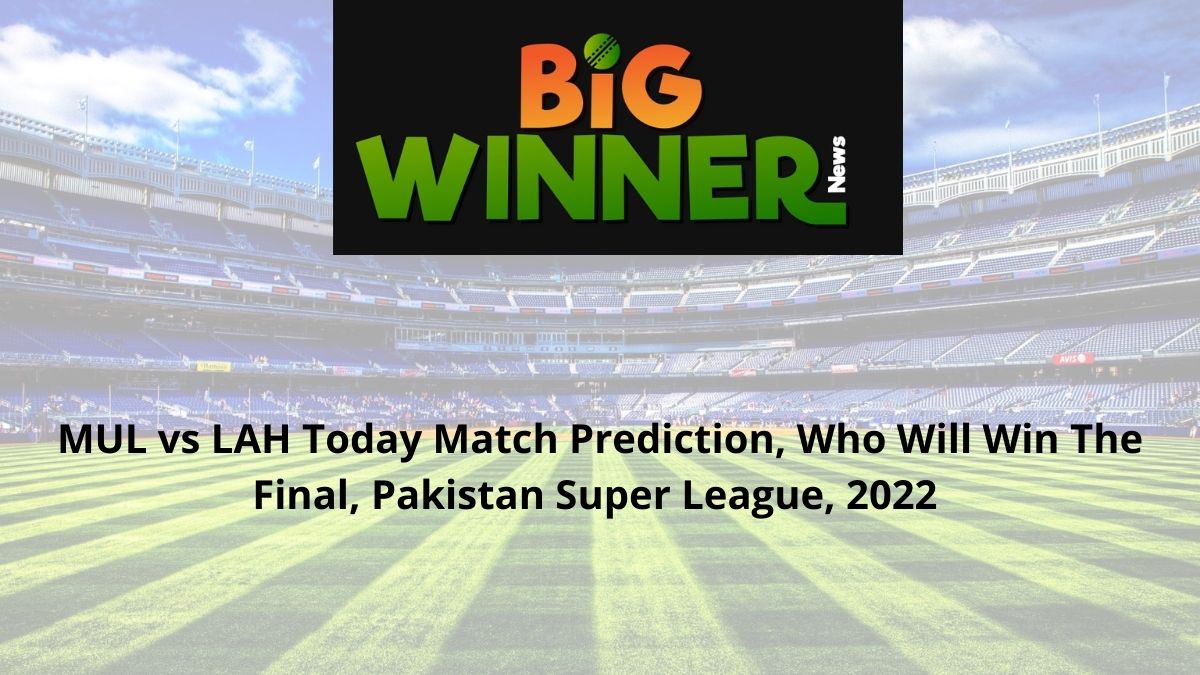 Our Experts bring you the finest today’s match prediction that you can trust. We are here for MUL vs LAH, Today Match Prediction, Final, Pakistan Super League, Online Cricket Betting Tips, which will provide every user with a clear picture of which team and in what aspect they can place their bets.

Multan Sultan won their 10th match season out of possible 11 fixtures when they win against tonight’s opponent’s in the qualifier. They lift trophy last year and are a match-closer to retain it on Sunday night. In the last match, they beat Qalandars by 28 runs with a brilliant performance from Rilee Russouw, Shahnawaz Dahani, and Mohammad Rizwan.

Lahore Qalandars won 7 and lost 5 matches this year, including 2 defeats against tonight’s opponent. Qalandars finished group stages in second position and have struggled in both qualifier and eliminator two. They lost against Sultans in the qualifier by big margin and win against Islamabad United by a narrow margin of 6 runs with just 2 balls remaining yesterday.

The temperature is expected to hover around 18°C on the match-day with 72% humidity and 4 km/h wind speed. There is 01% chance of precipitation during the game.

Gaddafi pitch proved helpful for the batsmen this year but bowlers also managed to get some help at the end of the inning lately. Highest runs-scorers Mohammad Rizwan, Fakhar Zaman, and Shan Masood all will be playing in the final on Sunday and it will definitely prove a high-scoring game.

This is the clash between teams who finished in the top-two positions in the group stages. Both teams deserve to be in the final as it was an all-round and consistent performance from both in-form sides. Multan Sultans are favorites to win this final and lift the trophy for the second consecutive year. Both teams face each other for three times this year, where Sultans managed to win twice, including the qualifier this week.

Multan Sultan’s star captain is in form of his life in both domestic and international cricket for the last few months. He is leading by example and is in contention to finish this season as the highest run-scorer. Rizwan has scored 532 runs in 11 matches with an average of 76.00 and a strike rate of 126.96 this year.

Lahore Qalandars opener broke a big record in the last match as he surpassed Babar Azam to become highest run-scorer in a single PSL season. Pakistani opener is also in contention to become the first player to cross 600 runs mark in PSL history this year. Zaman has scored 585 runs in 12 matches with an average of 48.75 and a strike rate of 154.35.

The soon-to-be 43-year-old South African leg-spinner has been in excellent form this season as he ranks 4th in the most-wickets chart. He is also leading the most-wickets chart for Sultans and will be a key for them in the finals. Tahir has taken 16 wickets in 11 matches with an average of 17.25 and an economy rate of 6.57.

The Qalandars express returned to his usual best in the last match with two big wickets after struggling in the last few matches. His return in the form will be a big boost for Lahore side who have struggled in the bowling department since the departure of star spinner Rashid Khan last week. Afridi has taken 17 wickets in 12 matches with an average of 21.41 and an economy rate of 7.58 this season.