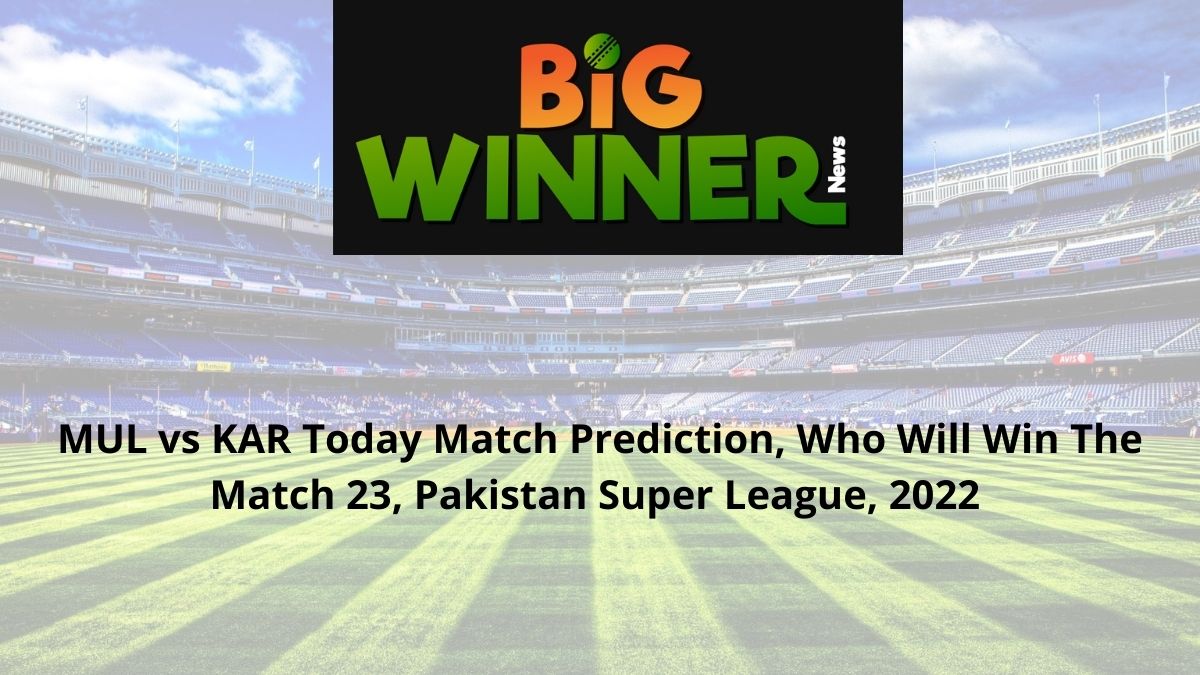 Our Experts bring you the finest today’s match prediction that you can trust. We are here for MUL vs KAR, Today Match Prediction, Match 23, Pakistan Super League, Online Cricket Betting Tips, which will provide every user with a clear picture of which team and in what aspect they can place their bets.

Multan Sultan will book their place in the qualifier with a win against Kings on Wednesday. Their fabulous winning run of 6 matches was halted by Lahore in the last match after they registered a big win of 52 runs. Sultans are placed in the first position with 12 points from the opening 7 matches but the Qalandars are closing in on them after their latest win.

Karachi Kings came very close to register their first win of the season against Islamabad United in the last match but lost by 1 run. This was their 8th successive loss in PSL and 7th this season. They are placed in last position in the league table with 0 points with just 3 matches remaining.

The temperature is expected to hover around 20°C on the match-day with 66% humidity and 05 km/h wind speed. There is 01% chance of precipitation during the game.

First half of the Pakistan Super League 2022 was played on Karachi pitch and second half is scheduled on Lahore pitch. Teams are scoring above the average mark on this balanced pitch and team playing first need to put up 180 plus runs on the scoreboard for a sure win on Wednesday.

Multan Sultans are expected to win against Karachi Kings

Karachi Kings fans are witnessing worst spell in their history and will be hoping to avoid another defeat on Wednesday. The Kings have lost all of their 7 opening matches and their chances to play in qualifier are already over.

Multan Sultans are in great form this season with 6 consecutive victories but lost against Lahore in the last match. But they are still favorites to win this fixture by big margin. In the returning fixture, Kings lost against Sultans by 7 wickets in the first match of this season.

Both Sultans’ openers Mohammad Rizwan and Shan Masood are in great form in this tournament and are key for their dominance so far. Rizwan is leading by example once again with 269 runs in 7 matches with average of 44.83 and a strike rate of 124.53.

Star opening batsman and team captain is performing at highest level once again after topping most-runs charts last season. He has scored 266 runs in 7 matches with average of 44.33 and a strike rate of 121.46 and remain only Kings’ player to cross 200 runs marks this season.

The veteran South African spinner is showing his fitness with joint most-wickets for his side this season. Tahir has taken 12 wickets in just 7 matches with an average of 15.58 and an economy rate of 6.67 this year. He has been tipped as best bowler on Wednesday on all the betting platforms.

English pacer has been sensational since his return in starting eleven for the Kings. Chris Jordan missed first 4 matches but has taken wickets in his last 3 matches. He has taken 6 wickets in 3 matches with an average of 19.33 and an economy rate of 9.66.