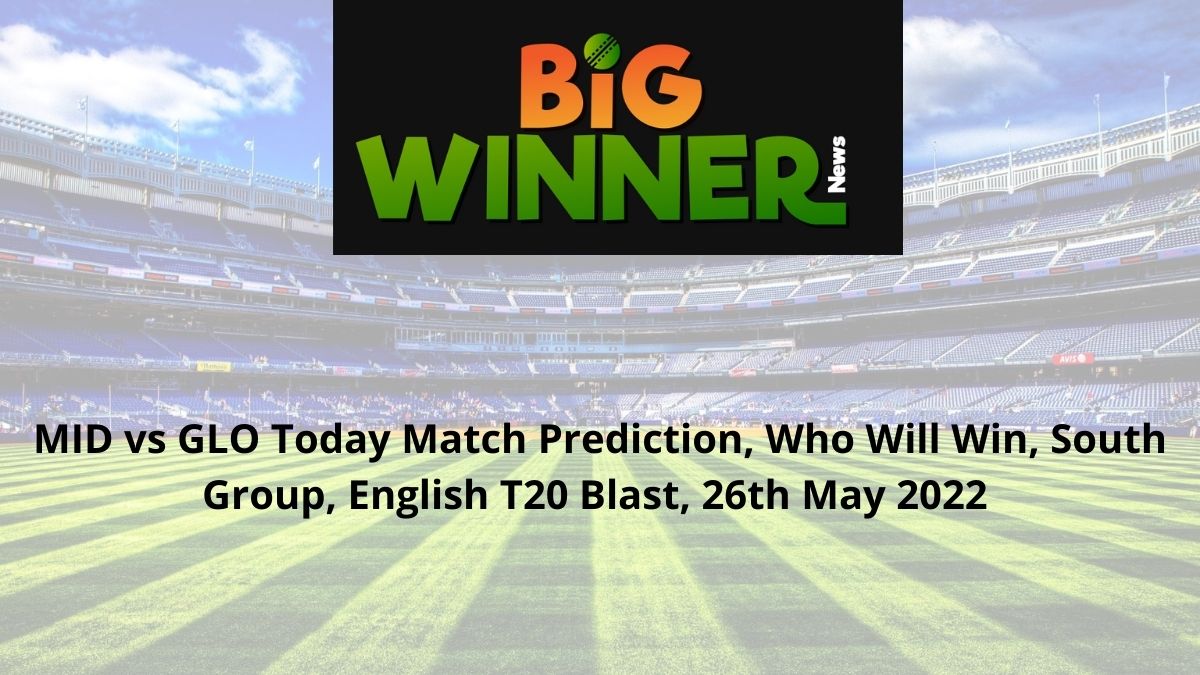 Our Experts bring you the finest today’s match prediction that you can trust. We are here for MID vs GLO, Today Match Prediction, South Group, English T20 Blast 2022, Online Cricket Betting Tips, which will provide every user with a clear picture of which team and in what aspect they can place their bets.

Middlesex are set to kick-off their English T20 Blast 2022 campaign with some big changes to their setup. They finished last season in 8th position from South Group with just 11 points. They managed to win just 4 matches with their batting setup to blame.

Gloucestershire suffered a disappointing season last year with 7th position finishing. They managed to won just 5 out of 13 matches and lost 4 of their last 5 matches in this tournament.

They have retained Glenn Phillips for another season after his heroics last year. But they lost star pacer Mohammad Amir to national duties with Pakistan team but signed his teammate Naseem Shah as his replacement. They have also signed another overseas player Marcus Harris for this season.

The temperature is expected to hover around 20°C on the match-day with 59% humidity and 31 km/h wind speed. There are 04% chances of precipitation during the game.

Radlett cricket club pitch is well balanced towards batter sin t20 matches. Pitch is flat and hard as ball comes nicely on the bat without much movement. Outfield is also fast which reflects on big scores here. Teams have never scored below 150 runs out of 8 T20 Blast innings here.

Gloucestershire are expected to win the match against Middlesex

Both Middlesex and Gloucestershire struggled for the consistency last season and failed to make quarter-finals round from South group. Both teams have lost their key pacers to international match duties and are unlikely to reach the knockout stages this season as well. Gloucestershire have dominated all five matches played against Middlesex in this tournament history with 4 wins and just 1 loss.

The 28-year-old batter has named as captain for Middlesex this season. He scored runs consistently for the last two seasons and is once again tipped as best batter for his team. Eskinazi was team’s highest runs-scorer with 399 runs from 11 matches with an average of 44.33 and a strike rate of 140.49 last season.

The Kiwi wicket-keeper batter was the lone fighter for Gloucestershire last season. He scored 500 runs in this tournament last year and was only player to cross 250 plus runs mark. Phillips has scored 645 runs in 35 matches with an average of 25.8 and a strike rate of 140.2.

The 20-year-old right-arm pacer enjoyed a great season last year and is expected to start from where he left. He was team’s highest wickets-taker with 20 wickets, ahead of Finn. Cullen has taken 20 wickets in just 12 t20 matches with an average of 16.4 and an economy rate of 8.79.

The star Pakistani pacer was excellent in domestic Pakistan Super League this year and is expected to be a key bowler for Gloucestershire from the start. He finished last year as team’s highest wickets-taker for Guetta Gladiators. Shah has taken 19 wickets 20 t20 matches with an average of 29.3 and an economy rate of 8.10.