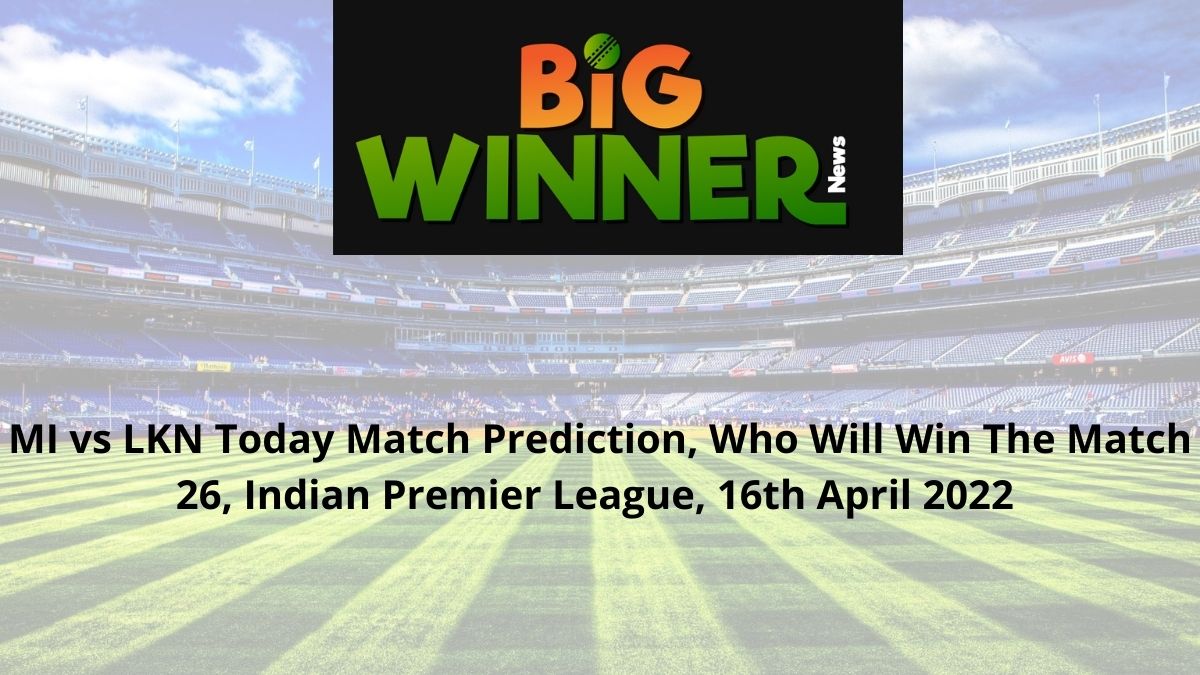 Our Experts bring you the finest today’s match prediction that you can trust. We are here for MI vs LKN, Today Match Prediction, Match 26, Indian Premier League, Online Cricket Betting Tips, which will provide every user with a clear picture of which team and in what aspect they can place their bets.

The one of the most successful teams in Indian Premier League history lost their 5th consecutive match of this season after a big defeat against Punjab Kings. PBKS scored 198 runs while batting first and then restricted MI to 186 runs in 20 overs. Once again, star player Rohit Sharma, Kieron Pollard, and Jasprit Bumrah struggled to make an impact.

With this loss, Mumbai Indians are placed in last position in the league table with 0 points from the opening 5 matches. There is a big pressure on captain Rohit Sharma to make big decisions about dropping key player Kieron Pollard and Tymal Mills and replace them with Tim David and Daniel Sams.

Debutant Lucknow Super Giants lost by just 3 runs against Rajasthan Royals in the last match. They restricted RR to just 165 runs while bowling first with debutant Krishnappa Gowtham taking 2 wickets. But the Royals showed their bowling strength to snatch a narrow win by 3 runs.

This was their 2nd defeat of this season after winning previous three matches. LKN are placed in 5th position in the league table with 6 points from the opening 5 IPL matches.

The temperature is expected to hover around 32°C on the match-day with 62% humidity and 14 km/h wind speed. There is 0% chance of precipitation during the game.

Brabourne pitch is excellent for the batters in this IPL 2022 season. There is no help for the spinners and dews make it more tough. Average score on this pitch remains above 180 runs and teams have consistently scored more runs.

Mumbai Indians became the first team in IPL history to lose five consecutive matches after another big defeat against Punjab Kings in the last match. They are now in serious trouble of finishing this season in the last position. Debutant Lucknow Super Giants lost their last match after winning previous three matches. Mumbai Indians are expected to make some big changes for this fixture and are poised to register their first win of this season on Saturday.

The experienced middle-order batsman was retained by Mumbai Indians and he is repaying back with consistent big scores this year. Yadav missed the first two matches due to injury but in the last 3 matches, he has scored two fifties and missed a half-century by just 7 runs in the last match. He has scored 163 runs in just 3 IPL matches with an average of 81.50 and a strike rate of 158.25.

The star Indian opener was in sensational form last year with 600 plus runs in just 13 matches. But he is struggling for consistency with his new team and bowled out to a golden duck in the last match. KL Rahul has scored 132 runs in 5 IPL matches with an average of 26.40 and a strike rate of 128.15 so far.

The sensational Indian star was the best bowler for Mumbai Indians in the last match but still, he is far away from his regular best. Bumrah is struggling for consistency this year but showed some positivity in the last match. He clean bowled in-form Liam Livingstone in the last match and conceded just 27 runs in his 4 overs. Bumrah has taken 4 wickets in 5 matches with an average of 36.25 and an economy rate of 7.90 this season.

Avesh Khan topped the most-wickets charts for Delhi Capitals last year and cost big for the Super Giants in the mega auction. He is once again leading most-wickets chart for his side but took just 1 wicket against Rajasthan Royals in the last match. Avesh Khan has taken 8 wickets in 5 matches with an average of 19.75 and an economy rate of 8.75 this year.