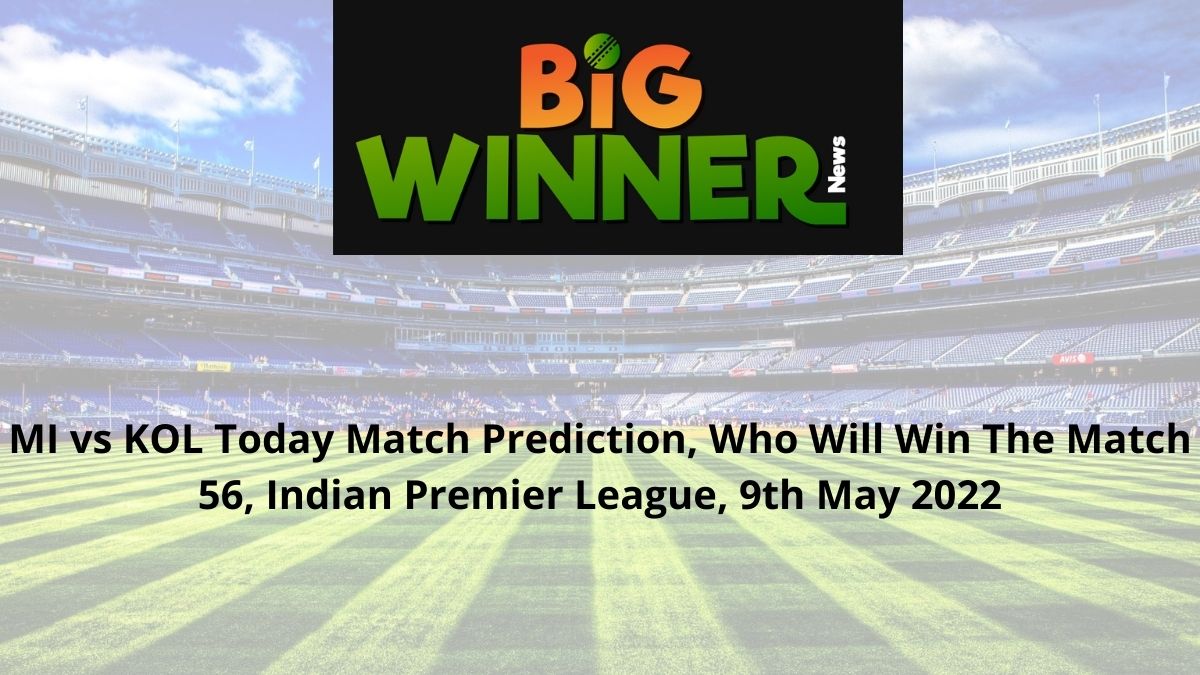 Our Experts bring you the finest today’s match prediction that you can trust. We are here for MI vs KOL, Today Match Prediction, Match 56, Indian Premier League, Online Cricket Betting Tips, which will provide every user with a clear picture of which team and in what aspect they can place their bets.

This was their just second win from the opening 10 matches but still Mumbai Indians are placed in last and 10th position in the league table with 4 points.

Kolkata Knight Riders suffered a big loss against Lucknow Super Giants in the last match, which hampered their hopes for the Playoff’s birth this season. Debutant Super Giants scored 176 runs while batting first and the Knight Riders stumbled to just 101 runs.

Kolkata Knight Riders are placed in 8th position in the league table with just 8 points from the opening 11 matches. Even if they won the remaining 3 matches, they will be tied to 5th position due to their poor net run rate.

The temperature is expected to hover around 30°C on the match-day with 83% humidity and 11 km/h wind speed. There are 03% chances of precipitation during the game.

DY Patil’s pitch is equally balanced towards both batters and ballers in any t20 game but the former are getting extra help late this season. The average score on this pitch is around 150 runs but teams are consistently scoring big totals here and Chennai Super Kings broke the highest-scoring record this season.

Mumbai Indians are finally playing up to their reputation with back-to-back wins but its a little too late. Kolkata Knight Riders are also struggling for consistency this season and another loss will end their hopes for the playoffs this season. The Knight Riders have always struggled against Mumbai Indians in the past but have won the last two matches, including a reverse fixture by 5 wickets this season.

The star Indian captain has struggled big this season but recently played some good knocks. He scored 43 runs off 28 balls against Gujarat Titans in the last match but is yet to score a fifty this season. Rohit Sharma has scored 198 runs in 10 matches with an average of 19.80 and a strike rate of 128.57.

Shreyas Iyer is only consistent batsman for the Knight Riders this season and only he can guide them to the playoffs in remaining three matches. Iyer is only batsman to score 300 plus runs and 2 fifties this season. He has scored 330 runs in 11 matches with an average of 33.00 and a strike rate of 130.95 this year.

The star Indian pacer remains one of the best fast bowler in the world despite his struggles this season. He has failed to take wickets on 7 occasions this season, including the last match. Bumrah has taken 5 wickets in 10 IPL matches with an average of 60.80 and an economy rate of 7.93 this season.

The Kiwi seamer has missed 6 matches this season but is still second highest wickets taker for Kolkata Knight Riders this season. He missed first reverse fixture against Mumbai Indians and took 1 wicket against Lucknow Super Giants in the last match. Southee has taken 11 wickets in just 6 matches with an average of 16.81 and an economy rate of 7.70 so far.