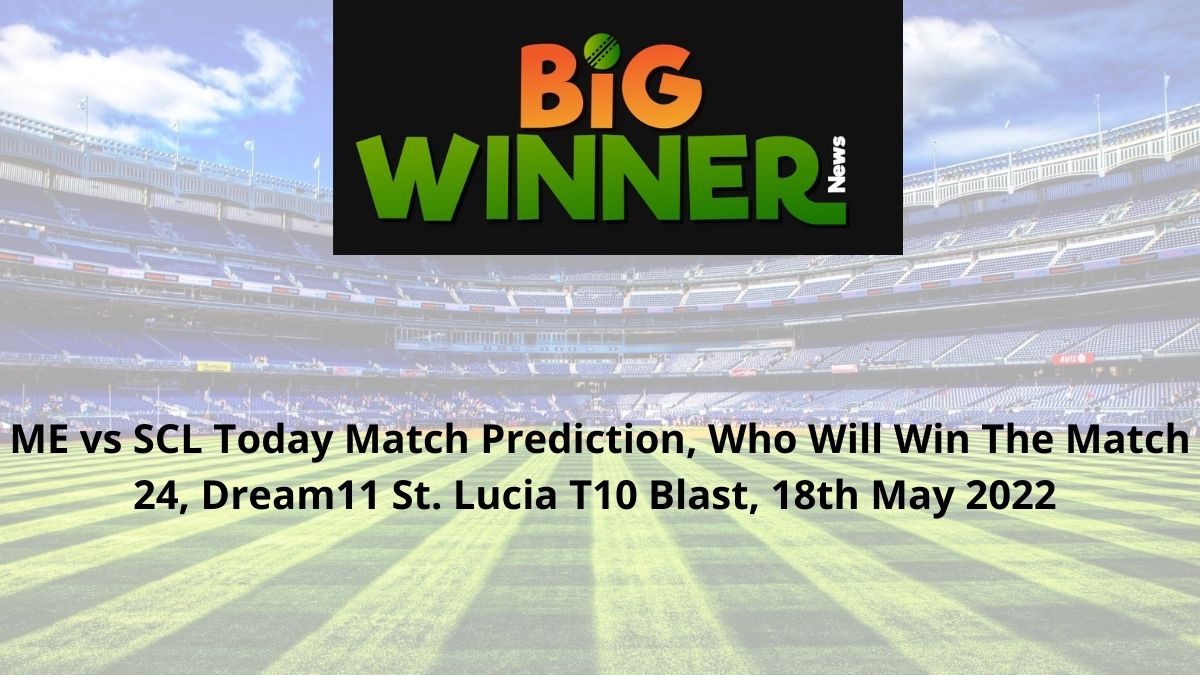 Our Experts bring you the finest today’s match prediction that you can trust. We are here for ME vs SCL, Today Match Prediction, Match 24, Dream11 St Lucia T10 Blast 2022, Online Cricket Betting Tips, which will provide every user with a clear picture of which team and in what aspect they can place their bets.

Micoud Eagles reached the finals in 2021 but have been very poor since then. They lost against struggling side GICB by 6 wickets in the last match and are yet to win this season with 3 matches already being played. Eagles are now placed in last position in the group A and need a win on Tuesday to remain in the title race. Micoud Eagles beat South Castries Lions by 6 wickets in their last and only encounter last year.

South Castries Lions lost their second consecutive match after a big defeat against high-flying BLS by 12 runs in the last match. They started this season with a big win of 10 wickets over GICB but now have lost two matches in a row. South Castries Lions are placed in 3rd positon in the league table with 1 win and 2 defeats from the opening 3 matches.

The temperature is expected to hover around 27°C on the match-day with 80% humidity and 30 km/h wind speed. There are 18% chances of precipitation during the game.

Daren Sammy pitch is proving little leaned towards pace bowlers this season but batters continue to hit big scores as well. Pitch has excellent amount of grass which is helpful for the seamers in the remaining matches as well.

ME vs SCL Top Players

The veteran 38-year-old batsman is the only consistent performer for Micoud Eagles this season. He has scored two 20-plus runs knocks and is leading the most-runs chart for ME. Shervin Charles has scored 56 runs in 3 matches with an average of 18.66 so far.

The star opening West Indies explosive batter has been sensational in all of the three opening matches. He scored 60 against GICB, 47 against BLS, and 37 runs off just 17 balls against SCSS in the last match. Johnson Charles is leading the most-runs chart in this tournament with 144 runs from 3 matches with an average of 72.00.

The 16-year-old son of legendary West Indies captain Daren Sammy is in great form for Micoud Eagles this season. He has taken 2 wickets each in both of the opening matches with a very impressive economy rate as well. Daren Sammy Jr is leading the most-wickets chart for ME with 4 wickets in 2 matches with an average of 5.00.

The 16-year-old rising star continues to shine for South Castries Lions this season. He took 2 more wickets against BLS after his 2 wickets for 3 runs haul against GICB in the opening match. Joseph is leading the most-wickets chart for SCL with 4 wickets in 3 matches with an average of 9.75.