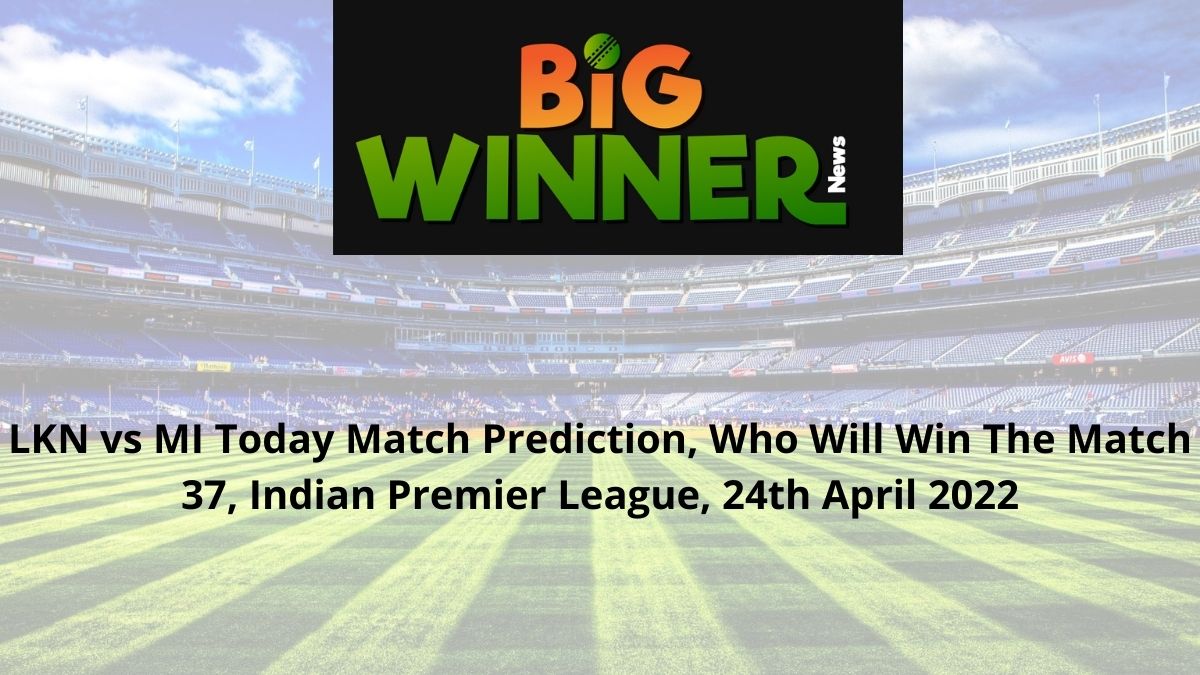 Our Experts bring you the finest today’s match prediction that you can trust. We are here for LKN vs MI, Today Match Prediction, Match 37, Indian Premier League, Online Cricket Betting Tips, which will provide every user with a clear picture of which team and in what aspect they can place their bets.

Lucknow Super Giants lost their last match against Royal Challengers Bangalore by 18 runs but are placed in top-four position in the league table. BLR scored 181 runs while batting first and then restricted Lucknow Super Giants 163 runs. Top-order batsmen failed to score big in this clash and will be looking to reverse that on Sunday night clash. They are placed in 4th position with 8 points from the opening 7 matches with 4 wins and 3 defeats so far.

Mumbai Indians suffered their 7th consecutive defeat in a thriller against traditional rivals Chennai Super Kings in the last match. They scored 155 runs while batting first and then failed to defend this total against CSK. MS Dhoni smashed 16 runs in last 4 balls to Jaydev Unadkat to steal a first win from Mumbai Indians.

Once again, Mumbai Indians openers Rohit Sharma and Ishan Kishan failed to score big with 0 runs each in the last match. Bowlers also struggled to contribute while defending a decent total as well. This was their 7th loss from the opening 7 fixtures and we are not expecting their first win on Sunday as well.

The temperature is expected to hover around 32°C on the match-day with 63% humidity and 8 km/h wind speed. There is 0% chance of precipitation during the game.

Wankhede pitch is balanced for the batter and ballers so far but we witnessed teams scoring 200 plus runs in both innings in the last match. Ball did very little movement in last few matches and we can expect another big scoring clash on Sunday night.

This will be the first reverse fixture of this season as both teams clashed against each other a week ago. Lucknow Super Giants won that fixture by a big margin of 18 runs with KL Rahul scoring his first century for his new team. They are once again favorites to win this reserve clash on Sunday after another defeat for the Indians in the last match. Mumbai Indians will be looking for their first win of this season but morale is very low and their opponents are flying high.

The star Indians wicket-keeper batter scored a first-century of this season when they faced Mumbai Indians a week ago. KL Rahul started this season with below average performances but now is in his best form. He scored 30 runs off 24 balls against Royal Challengers Bangalore in the last match. KL Rahul is leading most-runs chat for his team with 265 runs in 7 matches with an average of 44.16 and a strike rate of 141.71 so far.

The experienced retained batsman is the only player to score runs consistently this season alongside Tilak Varma. He scored another good knock of 32 runs off 21 ball against Chennai Super Kings in the last match. Suryakumar Yadav has scored 232 runs in 5 matches with an average of 58.00 and a strike rate of 153.64.

The on-the-rise Indian pacer was sensational against Mumbai Indians last week with 3 big wickets and will be hoping to repeat that performance once again. He was unable to take any wicket against BLR in the last match but is still in contention for the Purple Cap race this season. Avesh Khan is leading most-wickets chart for LSG with 11 wickets in 7 matches with an average of 20.09 and an economy rate of 8.28.

The star Indian pacer failed to take a wicket once again in the last match but was effective with strict economy rate. Bumrah is once again tipped as best bowler and he needs to deliver big in the remaining matches. He has taken 4 wickets in 7 matches with an average of 49.50 and an economy rate of 7.51 so far.