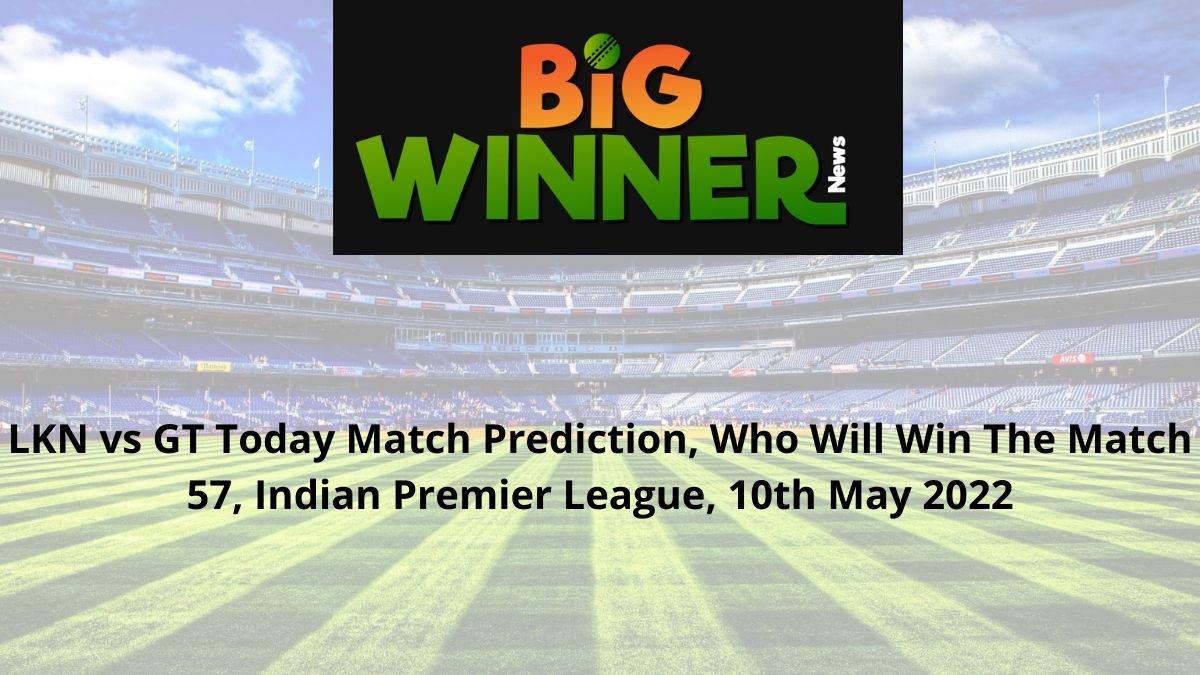 Our Experts bring you the finest today’s match prediction that you can trust. We are here for LKN vs GT, Today Match Prediction, Match 57, Indian Premier League, Online Cricket Betting Tips, which will provide every user with a clear picture of which team and in what aspect they can place their bets.

Lucknow Super Giants reached the top position in the league table with a big win over Kolkata Knight Riders in the last match. They scored 176 runs in the last match with Quinton de Kock scoring his third fifty of this season. Then Avesh Khan and Jason Holder took 3 wickets each to bowled out Kolkata side to just 101 runs.

Lucknow Super Giants secured the playoffs birth with that win but now will be looking to finish group stage campaign at top of the table.

This was their 3rd loss of this season and lost their top position to today’s opponent with same points in hand. Hardik Pandya started this season with big performances in the start but is now struggling in last few matches.

The temperature is expected to hover around 31°C on the match-day with 74% humidity and 6 km/h wind speed. There are 12% chances of precipitation during the game.

MCA pitch is perfectly balanced towards both batters and bowlers in any t20 game. Batsman dominated the first half of the season with big totals but bowlers are getting an extra help with pitch being old. Average score on this pitch is around 155 runs but we can expect a high-scoring game on Tuesday night.

Both teams are placed in top-two position in the league table with just three group stage matches remaining. Lucknow Super Giants have won four of their last five matches and enter this clash with a big win over Kolkata Knight Riders in the last fixture. Gujarat Titans have lost their last two matches in a row and looking out of momentum before this mega clash. Gujarat Titans won the first reverse clash against Lucknow Super Giants by 5 wickets.

The star Indian wicket-keeper batter continues to score big runs with 2 centuries and 3 fifties this season. He is only Indian batter to score a century this season and ranks 2nd in Orange Cap race. KL Rahul has scored 451 runs in 11 matches with an average of 50.11 and a strike rate of 145.01.

The young Indian opening batter has struggled for the consistency after a very good start to this season. He scored his third fifty of this season in the last match against Mumbai Indians and will be looking gain momentum from that inning. He has scored 321 runs in 11 matches with an average of 29.18 and a strike rate of 138.96.

The young Indian seamer was excellent against Kolkata Knight Riders with 3 wickets in the last match. He missed previous fixture due to a minor injury but is now looking fully fit before this mega clash. He is leading most-wickets chart from the Super Giants with 14 wickets in just 9 matches with an average of 19.00 and an economy rate of 8.14 so far.

The star Indian national seamer is enjoying a very good IPL season with consistent impressive spells. He took 3 big wickets against tonight’s opponent in the first reverse fixture in the early start of this season. Shami is leading most-wickets chart for the Titans with 15 wickets in 11 matches with an average of 24.33 and an economy rate of 8.29 so far.