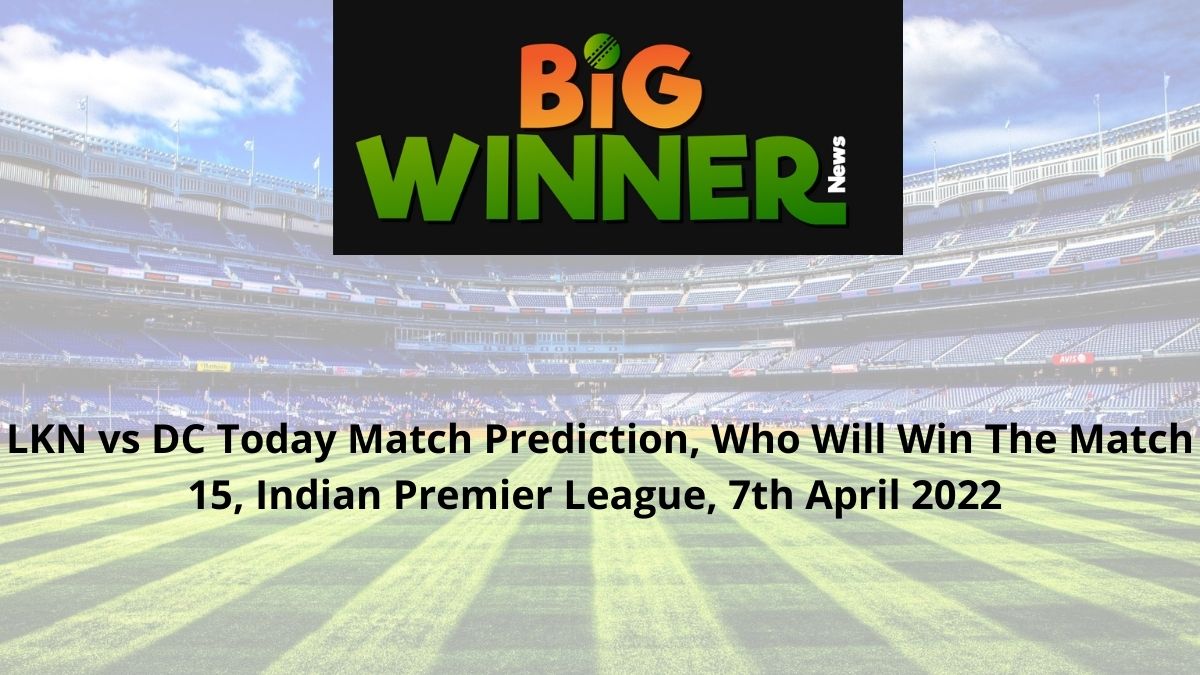 Our Experts bring you the finest today’s match prediction that you can trust. We are here for LKN vs DC, Today Match Prediction, Match 15, Indian Premier League, Online Cricket Betting Tips, which will provide every user with a clear picture of which team and in what aspect they can place their bets.

Lucknow Super Giants have returned to winning ways very quickly after their opening match defeat against Gujarat Titans. They won their last two matches against CSK and SRH and both wins were dominated ones. They scored 169 runs against SRH while batting first, thanks to the fifties form KL Rahul and Deepak Hooda. They Avesh Khan and Jason Holder restricted SRH to 1597 runs to register a 12 runs win.

LKN are expected to place the same starting eleven for this match as Marcus Stoinis is yet to complete his quarantine period of 3 days.

Delhi Capitals started this with a big over Mumbai Indians but their struggles were clear against Gujarat Titans in the last match. Bowers proved expensive where GT scored 171 runs while batting first. While chasing, top-order failed to score big runs once again and was restricted to just 159 runs. No player has scored 50 plus runs for Delhi Capitals in the first two matches and now bowler has taken more than 5 wickets so far.

Australian duo David Warner and Mitchell Marsh have joined the DC camp and the former is available for the selection. Warner is expected to replace Tim Seifert and open an inning with Prithvi Shaw. Biggest news for the fans is star pacer and one of the retained player Anrich Nortje is cleared to play this match and that will be a big boost for their poor bowing unit.

The temperature is expected to hover around 30°C on the match-day with 74% humidity and 6 km/h wind speed. There are 09% chances of precipitation during the game.

DY Patil pitch is excellent for the batter in t20 games and last two matches proved that. Teams have scored more than average runs on this pitch this season, which is around 150 runs. Toss will not be a crucial factor on this pitch but batting second will be beneficial due to late due here.

Lucknow Super Giants won both of their last matches after a defeat in the first match. Delhi Capitals lost against Gujarat Titans after a big win against Mumbai Indians in the opener. Delhi Capitals welcome back Australian start David Warner and Mitchell Marsh alongside retained star bowler Anrich Nortje for this clash. This clearly makes them favorites over in-form Lucknow Super Giants on Thursday.

LKN captain played a match winning knock against SRH in the last match after an another good inning against CSK. He scored 68 runs off 50 balls to balance his side to a big total against SRH. KL Rahul has scored 108 runs in 3 IPL matches with an average of 36.00 and a strike rate of 140.25 this season.

Australian veteran is set to make his debut for Delhi Capitals second time and is tipped as best batsman ahead of the likes of Rishabh Pant and Prithvi Shaw. David Warner has scored consistent runs for the years with SRH but struggled last year, which cost him his captaincy and place in the team. He has scored 5449 runs in 150 IPL matches with an average of 41.6 and a strike rate of 140.0.

The start-in-making pacer was excellent against SRH with 4 crucial wickets while bowling second. He is already in contention for the Purple Cap race and is tipped as best bowler for his side against DC. Avesh Khan has taken 7 wickets 3 IPL matches with an average of 13.57 and an economy rate of 8.14 this year.