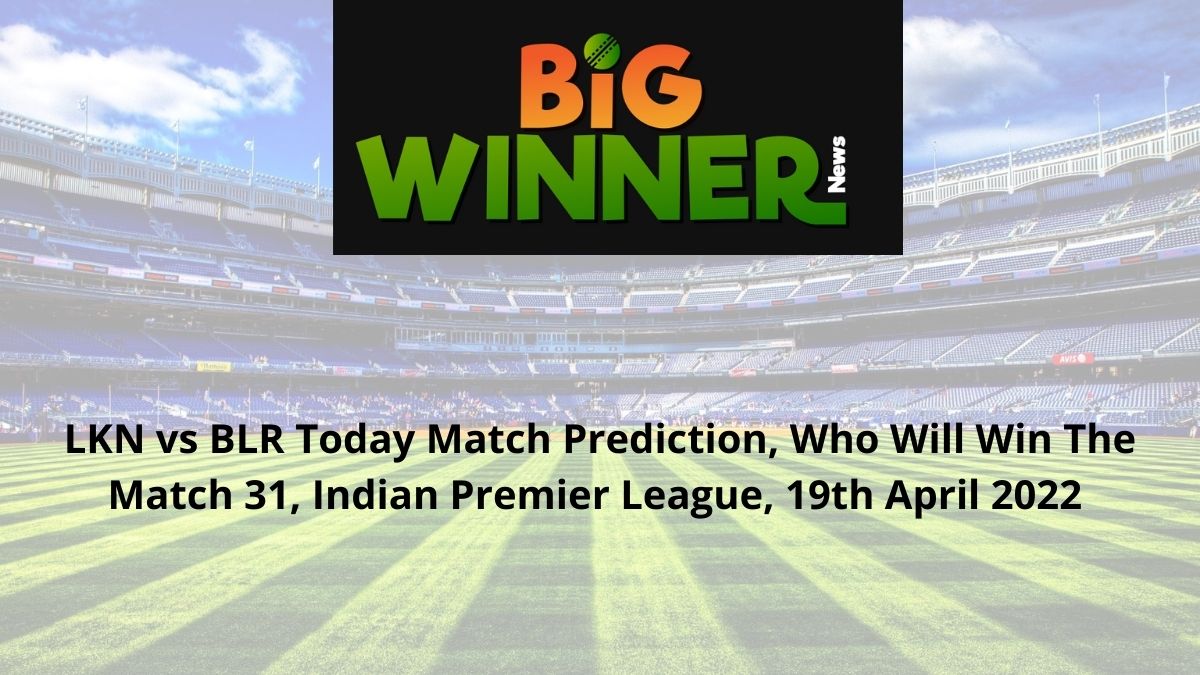 Our Experts bring you the finest today’s match prediction that you can trust. We are here for LKN vs BLR, Today Match Prediction, Match 31, Indian Premier League, Online Cricket Betting Tips, which will provide every user with a clear picture of which team and in what aspect they can place their bets.

Lucknow Super Giants, one of the debutant teams this season, are playing an exceptional cricket with another win in the last match. They beat struggling bottom side Mumbai Indian to register their 4th match of this season. LKN scored 199 runs while batting first where captain KL Rahul scored an unbeaten century, his first for the Super Giants. Then in-form pacer Avesh Khan took 3 wickets to restrict MI to just 181 runs in 20 overs. LKN are now placed in 2nd position in the league table with 8 points from the opening 6 matches.

Royal Challengers Bangalore quickly returned to the winning ways after their big defeat against Chennai Super Kings last week. They beat Delhi Capitals by 16 runs to register 16 runs win in their last fixture. BLR scored 189 runs while batting first, thanks to the fifties from Glenn Maxwell and Dinesh Karthik. Then they restricted DC to just 173 runs in 20 overs, where Josh Hazlewood took 3 wickets.

Now BLR are placed in 3rd position in the league table with 8 points from the opening 6 matches. They are on equal position with today’s opponents and can replace league leaders Gujarat Titans with a big win.

The temperature is expected to hover around 30°C on the match-day with 71% humidity and 12 km/h wind speed. There are 4% chances of precipitation during the game.

DY Patil pitch is equally balanced for the batter and bowlers in any t20 games in the past. This season teams batting second are enjoying good results thanks to the late dews in the game. Pitch has little grass which will clearly help the seamers and average score here balanced around 150 runs.

Both Lucknow Super Giants and Royal Challengers Bangalore have won 4 out of opening 6 matches this season. Lucknow Super Giants registered a big win over struggling Mumbai Indians in their last match. But now face tough competition from the Bangalore side who beat Delhi Capitals in the last match. The return of Harshal Patel and form of star all-rounder Glenn Maxwell make BLR favorites to win against LKN on Tuesday night.

The star Indian batsman and skipper returned to his usual form with an unbeaten century against Mumbai Indians in the last match. He scored 103 runs off 60 balls to score his first-ever hundred for the Super Giants. KL Rahul has scored 235 runs in 6 matches with an average of 47.00 and a strike rate of 144.17 this season.

The star former captain was unfortunate to get run-out in his second consecutive match this season. Kohli has scored two 40 runs plus knock this season and is tipped as best batsman for the Challengers on Tuesday. He has scored 119 runs in 6 matches with an average of 23.80 and a strike rate of 125.26 so far.

The right-arm pacer continues to rise as one of the best pacers in the league with another impressive performance in the last match. He took 3 wickets against Mumbai Indians, including big wickets of Rohit Sharma and in-form Dewald Brevis. Avesh Khan has taken 11 wickets in 6 matches with an average of 17.09 and an economy rate of 8.29.

The star Australian seamer was excellent against Delhi Capitals in the last match where he took 3 big wickets. Hazlewood remains only bowler in the world to rank in top-10 in every format of the game. He missed first 4 matches this season but has taken wickets in last two matches. Hazlewood has taken 4 wickets in 2 matches with an average of 15.25 and an economy rate of 7.62.