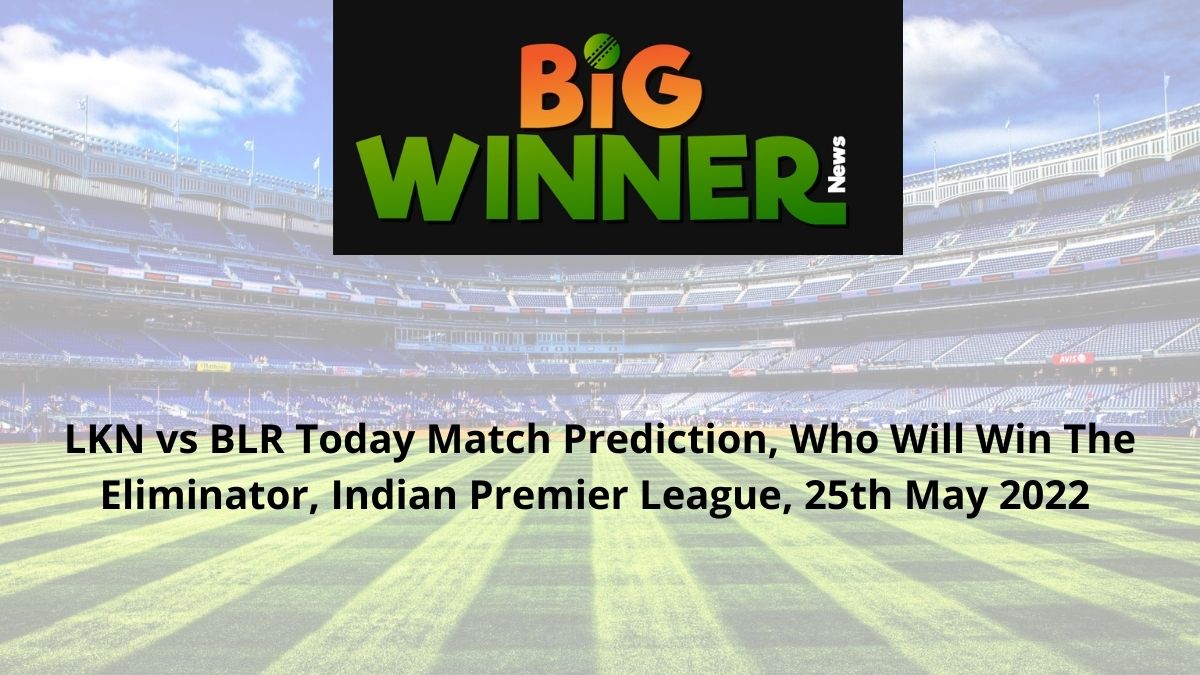 Our Experts bring you the finest today’s match prediction that you can trust. We are here for LKN vs BLR, Today Match Prediction, Eliminator, Indian Premier League, Online Cricket Betting Tips, which will provide every user with a clear picture of which team and in what aspect they can place their bets.

The Super Giants lost two of their last 4 matches and need some improvement in bowling department if they wish to reach the qualifier two round.

Star players Virat Kohli, Faf du Plessis, and Glenn Maxwell are in good rhythm lately. But Bangalore side have lost the experienced pacer and last season’s Purple Cap winner for this crucial match due to a minor injury to his bowling hand.

The temperature is expected to hover around 30°C on the match-day with 90% humidity and 4 km/h wind speed. There are 36% chances of precipitation during the game.

Eden Gardens pitch is scheduled for the only two playoff matches this season, so a new fresh pitch is expected. Kolkata pitch is little hard compared to Mumbai pitches and we can expect a high-scoring clash. Outfield is very flat and fast so it will be nightmare for the bowlers on Wednesday night.

Lucknow Super Giants struggled in last few matches with just 2 wins from last 4 fixtures but still finished this season in 3rd position. Royals Challengers Bangalore had to fight hard and depend on other teams’ results as well to reach the playoffs round. Bangalore side are in good momentum with star cricketer Virat Kohli scoring a big fifty in the last match. Royals Challengers Bangalore defeated Lucknow Super Giants by 18 runs in the group stage fixture and are favorites to reach the qualifier two round on Wednesday night.

The star wicket-keeper batter remains the only Indian batsman to score century this season and he has done it twice. He scored unbeaten 68 runs off 51 balls against Kolkata Knight Riders in the last match and ranks 2nd in Orange Cap race. KL Rahul has scored 537 runs in 14 matches with an average of 48.81 and an economy rate of 135.26.

The veteran South African opener and team’s new skipper has led BLR to the eliminator round with consistent runs. He scored 96 runs against tonight’s opponent in the group stage fixture and is only player to cross 400 runs mark for his team. Faf du Plessis is leading most-runs chart with 443 runs in 14 matches with an average of 34.07 and an economy rate of 130.67.

The 23-year-old left-arm pacer is enjoying a great debut season with Super Giants and is expected to feature for team India in near future. He finished group stage campaign with best average statistics after 3 wickets spell for just 20 runs in the last match against Kolkata Knight Riders. Mohsin Khan has taken 13 wickets in just 8 matches with an average of 13.23 and an economy rate of 5.93.

The star Australian pacer bowled a match winning knock against tonight’s opponents in group stage clash with 4 big wickets. He also took 2 more wickets against the Titans in the last match to reach the 15 wickets mark, despite missing first 4 matches. Hazlewood has taken 15 wickets in 10 matches with an average of 20.73 and an economy rate of 8.07.