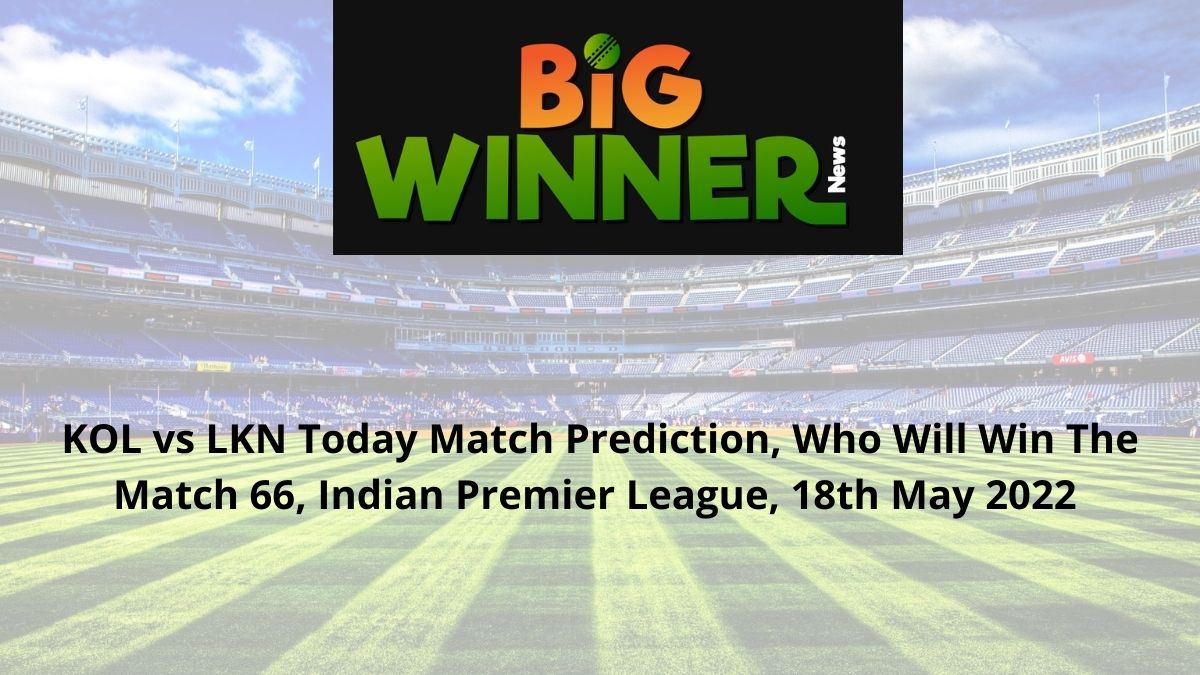 Our Experts bring you the finest today’s match prediction that you can trust. We are here for KOL vs LKN, Today Match Prediction, Match 66, Indian Premier League, Online Cricket Betting Tips, which will provide every user with a clear picture of which team and in what aspect they can place their bets.

Kolkata Knight Riders won their latest clash against Sunrisers Hyderabad by a big margin to remain alive in the race for playoffs. They scored 177 runs with Andre Russell scoring unbeaten 49 runs knock. Then he took 3 wickets as well to restrict the Sunrisers on just 128 runs.

Despite their latest two wins, Kolkata side are placed in 6th position in the league table with just 12 points. With only one match remaining, they are unlikely to qualify for the playoffs even if they win against Lucknow Super Giants on Wednesday.

With this loss, they lost their 2nd position as well and now looking to secure the top-four position by winning this last group stage clash.

The temperature is expected to hover around 31°C on the match-day with 73% humidity and 06 km/h wind speed. There are 2% chances of precipitation during the game.

DY Patil pitch is has grown into a perfect surface for the pace bowlers as this season coming to an end. Average score from the second inning is declining and now its below 145 runs as teams are not afraid to bat first.

Lucknow Super Giants lost their last two matches in a row but have qualified for the playoffs already. Their main target from this last fixture will be winning this clash and finish in top-two positions this season. Kolkata Knight Riders won their last two matches but are unlikely to finish in the top-four position even if they won this last match against Lucknow Super Giants. The Super Giants won their first reverse fixture against Kolkata Knight Riders by a big margin of 75 runs and are likely to win this last group stage match on Wednesday night.

Kolkata Knight Riders skipper has impressed everyone with his consistency this season. He scored just 15 runs against Sunrisers Hyderabad in the last match but still leading most-runs chart for Kolkata. Shreyas Iyer has scored 351 runs in 13 matches with an average of 29.25 and a strike rate of 130.48.

The star Indian batsman has been sensational with his new team with captaincy role and individual performances so far. He has scored two centuries already this season and remain only Indian to do so far. KL Rahul was run out on a rare diamond luck against Knight Riders in the first reverse fixture and will be looking to reverse that with a big inning. KL Rahul ranks 2nd in Orange Cap race with 469 runs 13 matches with an average of 42.63 and a strike rate of 132.54.

West Indies pacer has been sensational with both bat and ball this season despite his team’s recent struggles. No one would have predicted that he will be highest-wickets taker for Kolkata side ahead of the like of Umesh Yadav, Pat Cummins, and Tim Southee at the end of this season. Russell has taken 17 wickets in 13 matches with an average of 13.70 and an economy rate of 9.25.

The world-class all-rounder has been very consistent with his bowling for Lucknow Super Giants lately. He took 3 big wickets against tonight’s opponent in the first reverse fixture and has taken wickets in all of the last three matches. Jason Holder has taken 14 wickets in 11 matches with an average of 24.71 and an economy rate of 9.22.