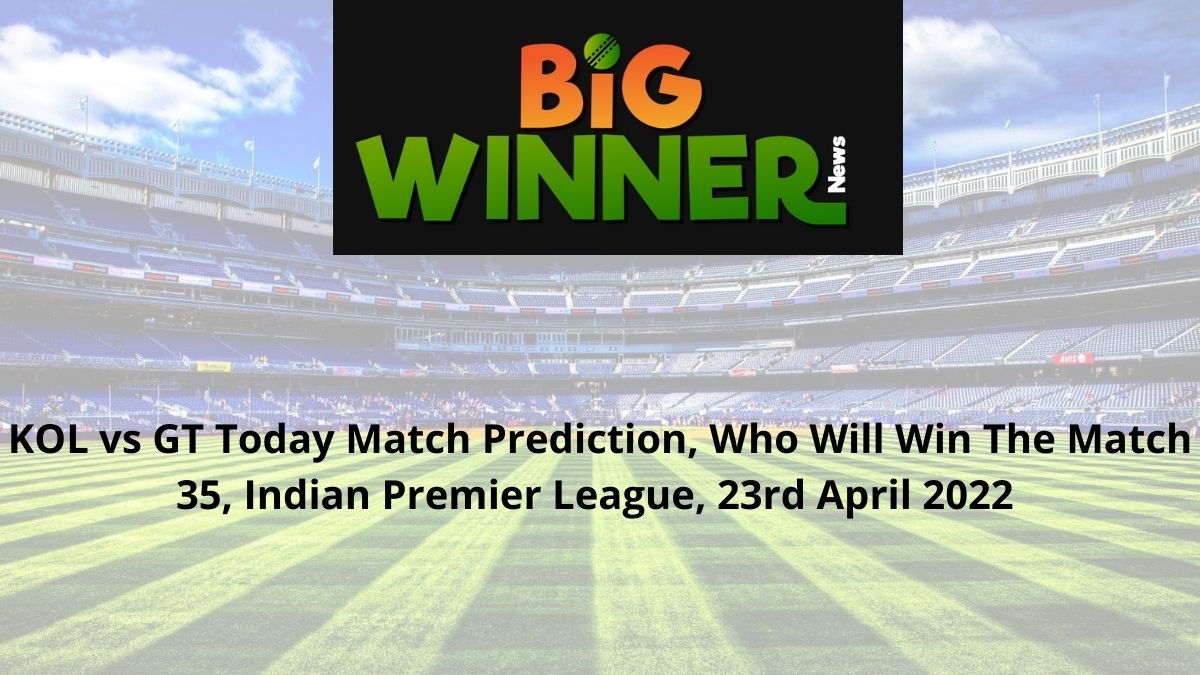 Our Experts bring you the finest today’s match prediction that you can trust. We are here for KOL vs GT, Today Match Prediction, Match 35, Indian Premier League, Online Cricket Betting Tips, which will provide every user with a clear picture of which team and in what aspect they can place their bets.

KOL are now placed in 7th position in the league table with 6 points from the opening 6 matches, with 4 defeats and 3 wins so far.

Gujarat Titans win their 5th match last time form the opening 6 matches on their IPL debut season. They beat Champions Chennai Super Kings by 3 wickets with a ball remaining 5 in the last match. CSK scored 168 runs while batting first and their bowlers almost clinched two points. But David Miller and Rashid Khan scored runs for the fun in last three overs to turn the result in the last over.

Gujarat Titans keep their top position in the league table with 10 points with 5 wins and just 1 loss so far. In-form skipper Hardik Pandya missed the last match after suffering a minor injury against Rajasthan Royals. There is now official report on his fitness report but he is likely to be rested for this clash even if he is fit.

The temperature is expected to hover around 36°C on the match-day with 45% humidity and 15 km/h wind speed. There is 1% chance of precipitation during the game.

DY Patil pitch is perfectly balanced for both batters and bowlers in any t20 game. Average score on this pitch is around 150 runs but teams have consistently scoring higher runs this season. There will be no dew in this fixture due to afternoon game so we can expect more help for the seamers on Saturday.

Gujarat Titans were lucky to earn two points against Chennai Super Kings in the last match to remain at the top of the league table. Kolkata Knight Riders lost their 3rd consecutive match of this season and now looking for the turnaround on Saturday. In-form skipper Hardik Pandya is unlikely to play this match due to a minor knack last week. This gives Kolkata Knight Riders a big morale boost on Saturday.

Kolkata Knight Riders spent a big chunk of money on Iyer and this gamble has paid off so far. Iyer scored his second fifty of this season with 85 runs knock against Rajasthan Royals in the last match. He is leading most-runs chart for his team with 236 runs in 7 matches with an average of 39.33 and a strike rate of 148.42 so far.

Shubman Gill was signed by new-comers Gujarat Titans before the auction and star Indian opener has repaid the faith shown in him so far. He has scored two big fifties this season already but was caught out on 0 runs in the last match. Gill has scored 200 runs in 6 matches with an average of 33.33 and a strike rate of 151.51.

Kolkata Knight Riders retained star spinner remains the only in-form bowler so far. He is the only bowler in this tournament to keep average below 6.00 so far. Narine was excellent in the last match with 2 wickets and gave away just 21 runs in his 4 overs. Narine has taken 6 wickets in 7 matches with an average of 23.50 and an economy rate of just 5.03.