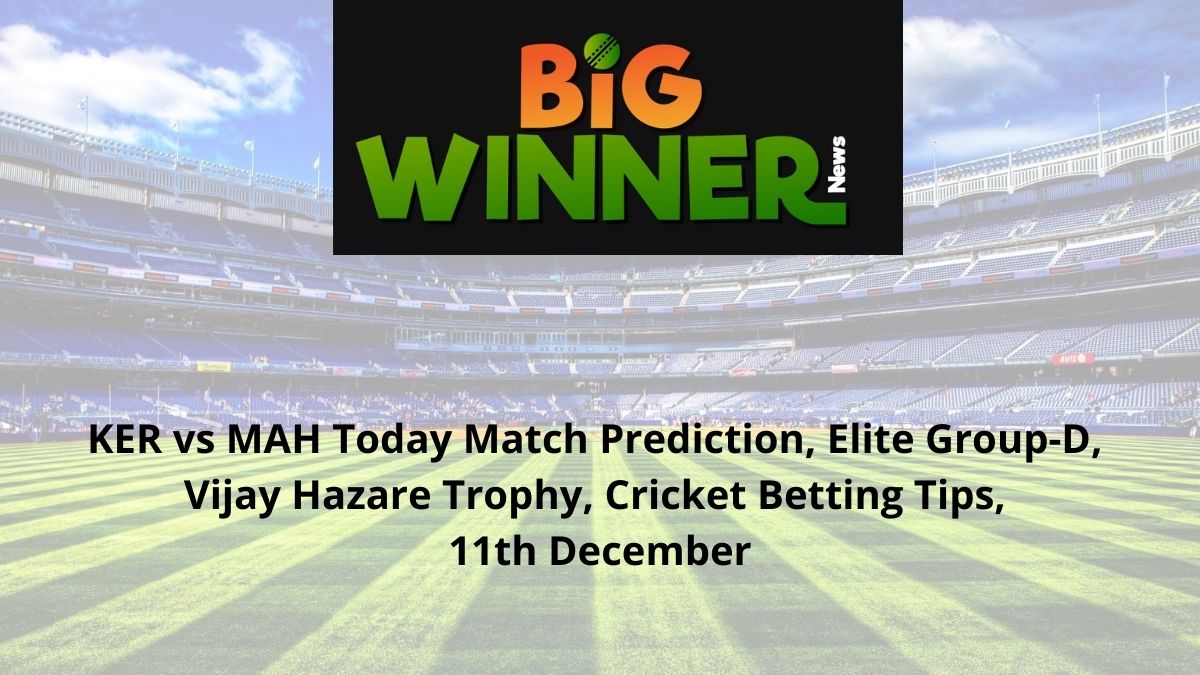 This is the only destination that brings you the finest today’s match prediction that you can trust. We are here for KER vs. MAH Today Match Prediction, Vijay Hazare Trophy, Online Cricket Betting Tips, which will provide every user with a clear picture of which team and in what aspect they can place their bets.

Maharashtra is a serious contender for this year’s Vijay Hazare Trophy and in both matches, it is the captain who has been leading from the front. Ruturaj Gaikwad is on a roll this year and has carried forward his IPL form into domestic cricket. He smashed unbeaten 136 runs against Madhya Pradesh in the first match and continued with a swashbuckling knock of 154 runs against Chhattisgarh.

Apart from Ruturaj Gaikwad, the whole team is contributing collectively so far with bowlers like Mukesh Choudhary having shown tremendous potential in recent matches. Maharashtra has a terrific chance to take an indispensable lead at top of the table if they defeat Kerala in this high-flying encounter. They have already beaten Madhya Pradesh and if they win this match then their qualification is certainly sealed.

Best Batsmen for Maharashtra this season

Top Bowlers for Maharashtra this season

Kerala is up against the table-toppers Maharashtra after losing the last match against Madhya Pradesh. The Kerala side is currently 2nd in the points table but needs to win this match if they want to keep their hopes alive to qualify for the next round. In both the matches so far, their performances have been contrasting as against Chandigarh their bowling rattled them for just 184 runs but against Madhya Pradesh, they conceded mammoth 329 runs.

Kerala cricket has been on a symbolic rise in the last year as they have been consistently giving thumping performances in every domestic tournament. In the recently concluded Syed Mushtaq Ali Trophy also, they reached the Quarter Finals. Their team is full of exciting batsmen like Sanju Samson, Vishnu Vinod, Mohammed Azharudden but it is the bowling that needs to step up. Only Basil Thampi is the known face in their inexperienced bowling lineup and needs to be at A-game to defeat Maharashtra in this match.

Top Batsmen of Kerala this season

Top Bowlers of Kerala this season

The weather will be perfect for this match as the temperature will be around 25 degrees with low humidity and sunshine. Winter has arrived in the Western and Northern regions of India which is going to make the weather a bit cold in the morning but as the sun will pop out then it would be delightful conditions for both teams.

The match will be played at Madhavrao Scindia Cricket Ground which is in Rajkot. It might sound like an unknown ground to some people but it has hosted 12 ODI matches and the last one was the run-fest between India and Srilanka where both teams scored more than 414 runs. This ground is mostly used for Domestic games and has a good track record of favoring batters. The average score will be around 265 and batsmen will have a day to cherish here.

KER vs MAH – Who will win the match, Today Match Prediction:

Maharashtra is expected to win the match against Kerala

The professional Today Match Prediction experts feel Maharashtra will win against Kerala in this match. Maharashtra is currently top of the table and certainly playing cricket at a different level at the moment. They have a balanced side but the dream form of Ruturaj Gaikwad makes them a huge favorite for this match.

He has scored hundreds in both matches and will look to continue his dream form to clinch a spot in the next round for Maharashtra. But Kerala is also a dangerous side with many powerful players like Samson, Sachin, Vinod in the armory. The biggest problem for Kerala has been their bowling and they might struggle here at Rajkot on a batting-friendly wicket. We think Maharashtra will win this match.

One player who has enjoyed a tremendous rise in the last year has been Ruturaj Gaikwad. The Orange cap winner of this season’s IPL has carried his dream form and is Vijay Hazare Trophy’s top run-scorer with 290 runs. Scoring hundreds is one thing but converting them into a big one and remaining till the end is an art and Ruturaj Gaikwad is surely an artist of it.

He doesn’t look like a powerful hitter of a cricket ball but surprisingly when he hits the ball, it travels a long way. He is a touch class player and his sound technique makes him a mandatory pick for everyone.

Sachin Baby is the former captain of the Kerala team and so far in this tournament, he has been contributing extremely well with the bat in the middle order. He has scored fifty in both matches so far and his ability to dictate the game in middle overs makes him a serious threat to the Maharashtra team.

Sanju Samson has not been fired so far in the tournament and a lot depends on him if Kerala wants to upset the table-toppers Maharashtra. Baby is an experienced player and was recently seen in IPL also with Royal Challengers Bangalore. He can give you good returns.

Maharashtra team is a batting heavy side and has many big names in the batting order but one area where they have been struggling for years has been the bowling department and finally, their search looks set to end because of Mukesh Choudhary.

Mukesh is a promising left-arm pacer from Bhilwara and so far has been single-handedly carrying the burden of the whole team. He has picked 6 wickets in 2 games and his best came against Chhattisgarh where he picked 4 wickets. His performance is going to be more crucial than Ruturaj Gaikwad for Maharashtra’s chances in this season of the Vijay Hazare Trophy.

Basil Thampi is a familiar name to all Indian cricket fans. The 2017 IPL’s Emerging player of the year has failed to replicate his early success of IPL in the domestic circuit. He was part of Sunrisers Hyderabad for 4 years but played less than 10 matches in that span.

Thampi is much like Kerala’s old spearhead Sreesanth and is blessed with express pace and aggression. He has looked good this season and picked 4 wickets from 2 matches so far. Thampi is the most experienced player in Kerala’s bowling department and will look to deliver a strong performance in this must-win game for Kerala.