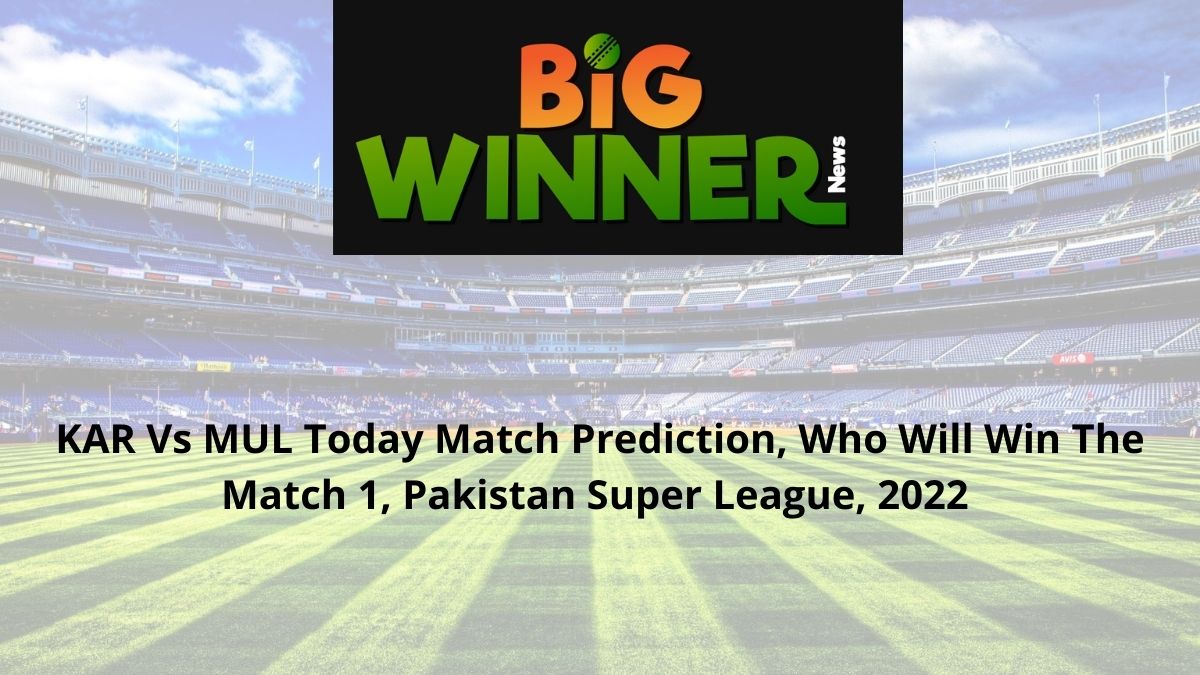 Our Experts bring you the finest today’s match prediction that you can trust. We are here for KAR vs MUL, Today Match Prediction, Match 1, Pakistan Super League, Online Cricket Betting Tips, which will provide every user with a clear picture of which team and in what aspect they can place their bets.

Pakistan Super League 2022 start with a bang as giants Karachi Kings host last year’s winners Multan Sultan at National Stadium, Karachi. Kings finished in the 4th spot in group stages and later eliminated by Peshawar Zalmi in Play-Offs. This year, once against captain Babar Azam will be leading the teams and they are one of the favorites to lift the trophy next month.

Multan Sultans beat Peshawar Zalmi to lift PSL 2021 Trophy last year and once again are one of the favorites to win this league. Star captain Mohammad Rizwan scored 500 runs last year and enter this tournament in a great form. He will be looking forward carry on last year’s momentum and retain the trophy.

The temperature is expected to hover around 27°C on the match-day with 33% humidity and 5 km/h wind speed. There are 05% chances of precipitation during the game.

There will be minimum grass on the pitch so it will be a big scoring match. Average score in both innings is around 165 runs, so any score above 170 will be defendable.

Karachi Kings expected to win the match against Multan Sultans

Karachi Kings had a poor end to last year’s Pakistan Super League campaign but now they are still favorites to win against the champion and leading the odds on every betting platform. Babar Azam ended last year as a top run-scorer and once again will be leading by example and is expected to start with a big score.

Multan Sultans won four out of their last 5 matches, including the final against Peshawar Zalmi. Wicket-keeper captain Mohammad Rizwan scored 500 runs alone and was just 54 runs behind leader Babar Azam. In Bowling, Shahnawaz Dahani took 20 wickets in 11 matches to end the campaign as a top wickets-taker of PSL 2021.

Pakistan all-format captain has a fantastic year with bat as he ended campaign as top runs-scorer with 554 runs with an average of 69.25 and striker rate of 132.53. He scored 7 fifties in 11 matches and his high score was 90 runs not-out.

Sultans captain and star player finished last year with 500 runs, just 54 less than Babar Azam. He maintained an average of 45.45 and his strike rate was 127.87. He scored 4 fifties in 11 matches and his highest run score was 82 runs not-out.

Mohammad Amir had a forgetful season last year as he took only 5 wickets in 11 matches with an average of 69.80 and an economy rate of 8.37, not so good for player of his stature. Still, Mohammad Amir has tipped as best bowler for Kings on betting platforms.