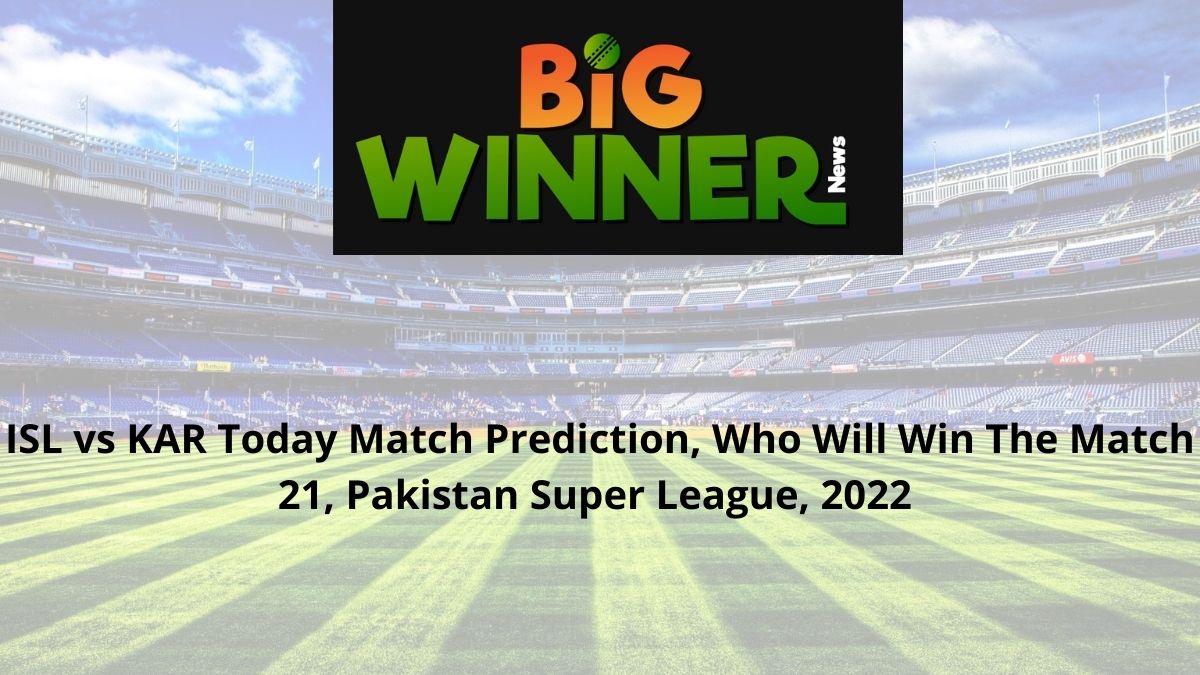 Our Experts bring you the finest today’s match prediction that you can trust. We are here for ISL vs KAR, Today Match Prediction, Match 21, Pakistan Super League, Online Cricket Betting Tips, which will provide every user with a clear picture of which team and in what aspect they can place their bets.

Islamabad United finished last season’s group stage campaign as league topper with record 20 points but lost in the second eliminator. This season they have lost 3 and won 3 matches so far but all of their defeats were narrow margin results. The United are placed 3rd in the league table with 6 points and are expected to do well in the remaining 4 matches.

Karachi Kings failed once again yesterday after another poor performance from both batters and bowlers. Peshawar Zalmi managed to put up 193 runs on the board while batting first and then restricted the Kings to 138/6 runs after 20 overs. This was their 7th defeat in a row and 6th in this tournament.

The temperature is expected to hover around 28°C on the match-day with 80% humidity and 02 km/h wind speed. There is 01% chance of precipitation during the game.

The first half of the tournament was played on the Karachi pitch and now the remaining matches, inkling final will be played on this neutral Lahore pitch. Teams have scored above the average mark of 160 runs in the last 4 matches on this pitch and batsmen are expected to enjoy this fast pitch for the remainder of the season.

Islamabad United are expected to win against Karachi Kings

It’s been a season to forget for Karachi Kings and Babar Azam fans as they are witnessing one of the worst spell from their favorite team. Karachi Kings were favorites to dominate group stage fixtures but have lost all of their 6 matches and odd have turned against them for the remained of the fixtures.

Islamabad United are not so consistent this year but have lost all of their 3 matches by a narrow margin. They are clear favorites to win on Monday, given the form of both the teams, but Kings are desperate for their first win for sure.

The experienced English opener scored his second fifty of this season and now leading most-runs charts for the United. Hales has scored 230 runs in just 6 matches with an average of 46.00 and a strike rate of 159.72 this year.

Babar Azam continues to add runs to his mind-blowing runs tally but he is not able to end his team’s struggles this season. He scored another fifty in the last match and now has scored 253 runs in just 6 matches with an average of 50.60 and a strike rate of 120.47 this year.

The star all-rounder is leading from the front for the United this year with both bat and ball. Shadab khan has scored 198 runs in just 5 innings already but his bowling stats are jaw-dropping this season. He is leading most-wickets charts of PSL 2022 with 17 wickets in just 6 matches with an average of 8.52 and an economy rate of just 6.04. No one is near him in bowling charts.

The experienced English all-rounder missed first 4 matches this season but has been sensational in the last 2 matches. He took 3 wickets in the last match and has taken total of 5 wickets in just 2 matches with an average of 15.40 and an economy rate of 9.62.