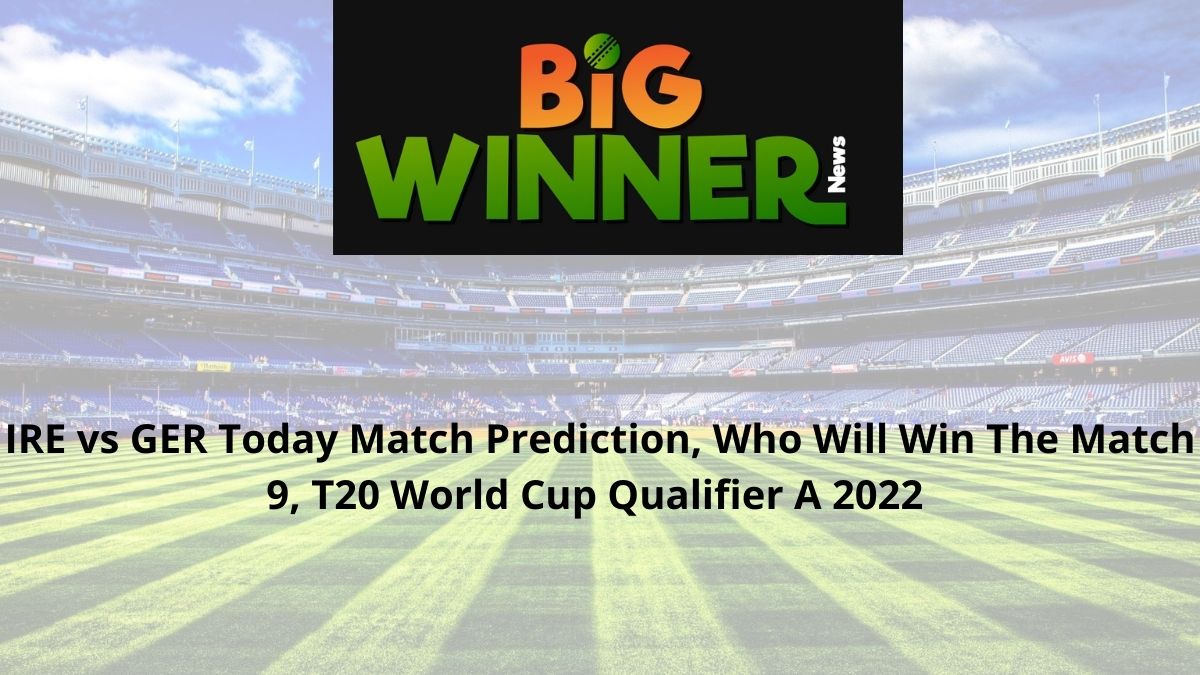 Our Experts bring you the finest today’s match prediction that you can trust. We are here for IRE vs GER, Today Match Prediction, Match 9, T20 World Cup Qualifier 2022, Online Cricket Betting Tips, which will provide every user with a clear picture of which team and in what aspect they can place their bets.

Ireland struggled in the Oman series and once again they failed to overcome United Arab Emirates’ challenge in the first match. They managed to beat Bahrain in the last match by 21 runs as expected but were not convincing. They rank 15th in the ICC T20 team’s ranking but have quality to compete in the upcoming T20 World Cup.

Top Batsmen of Ireland from the last match

Top Bowlers of Ireland from the last match

Germany team was always an outsider in the t20 World Cup qualifiers as they rank 34th in the ICC T20 team’s ranking. They were very disappointing against Bahrain in the first match but showed goof intent in the last match against group giants United Arab Emirates. The Germans managed to score 167 runs while chasing 192 runs and will be hoping for another goof scoring clash against Ireland on Monday.

The temperature is expected to hover around 27°C on the match-day with 36% humidity and 11 km/h wind speed. There is 1% chance of precipitation during the game.

Al Amerat pitch on turf A is good for the bowlers as they get good movement on the ball in the later stages of the game. Spinners have dominated on this pitch in the past and this tournament is no different so far.

Ireland are expected to win against Germany.

Ireland are clear favorites to win this fixture by margin and leading betting odd almost 1 to 30 on Monday. Ireland lost the first match against United Arab Emirates but made a good comeback against Bahrain in the last match. Ireland have lost first 2 matches and have no chance against Ireland on Monday, which was expected from the newcomers.

The veteran star opener is leading most-runs charts for his side in the t20 World Cup qualifiers but big-inning is yet to come. Stirling has scored 64 runs in 2 matches with an average of 32.00 and a strike rate of 128.57 so far.

The 21-year-old right-handed batsman was excellent against United Arab Emirates in the last match with a brilliant fifty. Justin Broad has scored 82 runs from the first 2 matches with an average of 41.00 and a strike rate of 143.85.

The star Irish pacer was excellent in the recently concluded Oman Series and continues his form in the World Cup qualifiers. Young is leading most wickets charts for Ireland with 5 wickets in just 2 matches with an average of 10.00 and an economy rate of just 6.25.

The right-arm pacer has been good in the first two matches of the qualifiers and tipped as best bowler for the Germans on Monday. Fayaz Khan has taken 2 wickets in 2 qualifier matches with an average of 27.00 and an economy rate of 7.71 so far.