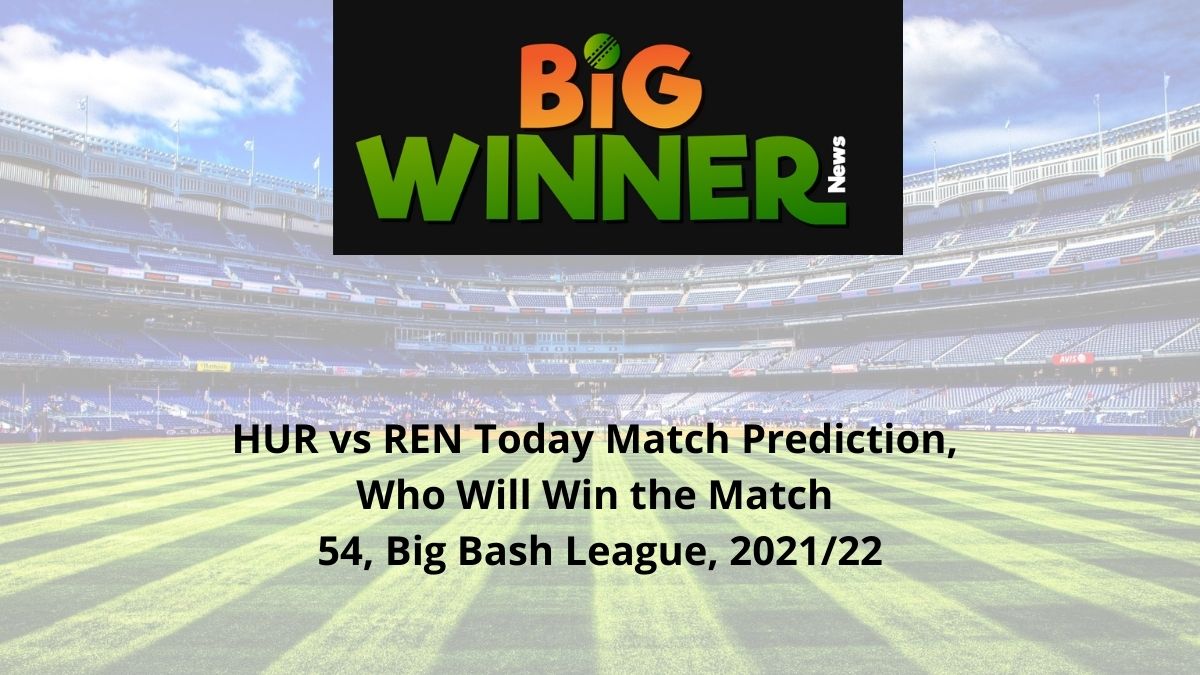 Our Experts bring you the finest today’s match prediction that you can trust. We are here for HUR vs REN Today Match Prediction, Match 54, Big Bash League, Online Cricket Betting Tips, which will provide every user with a clear picture of which team and in what aspect they can place their bets.

Hobart Hurricanes have performed pretty well in some of their recent games. This is a must win match for them if they want to qualify for the play offs. They are currently ranked 5th on the points table with 24 points.

Melbourne Renegades had a very poor BBL campaign so far this season. Melbourne Renegades lost their previous game against the Melbourne Stars by 6 wickets. Their bowling side is performing well but their batting department has not been at their best, currently, they are sitting at the bottom of the points table with 15 points.

The temperature is expected to hover around 22°C on the match-day with 53% humidity and 23 km/hr wind speed. There are 10% chances of precipitation during the game.

The pitch at Docklands Stadium has a track record of being good for the Batting side. The batsmen will enjoy batting on this surface and there is also a little help for the swing bowlers but not much assistance for the spinners on this track. The average first innings score at this venue is 159 and anything over 180 will be a match triumphing score here.

Hobart Hurricanes are expected to win the match against Melbourne Renegades

Hobart Hurricanes is a well-balanced side, their batting, and the bowling department have performed consistently well. They are currently sitting at the fifth position on the points table, this is a must-match for them and they will try their best to qualify for the playoffs.

The last time these both teams faced each other, Hobart won the game by 85 runs and they will look to repeat the same again. Hobart Hurricanes are the favorites to win this match.

Ben McDermott is a tremendous batsman, he is performing consistently well with his bat, he has become a vital member of the Hobart Hurricanes team and he has scored 513 runs so far in this series. Ben McDermott is expected to click a fine knock in the next game against Melbourne Renegades.

Aaron Finch is the top batting option from the Melbourne Renegades side, he is in excellent form at the moment having scored 229 runs at an average of 28.60 so far in this series. He is an explosive batsman and he has the ability to hit big in the powerplay overs. He can give you good returns from this match and is our pick for best batsman from Melbourne Renegades.

Thomas Rogers is really threatening with the ball, he is currently the leading wicket-taker of the team with a total of 15 wickets and is a safe player to bet on in the upcoming match.

Zahir Khan is in tremendous form. He has been impressive with the ball this season and has picked up 12 wickets so far in this tournament. Zahir Khan will be an impactful player in the upcoming match.