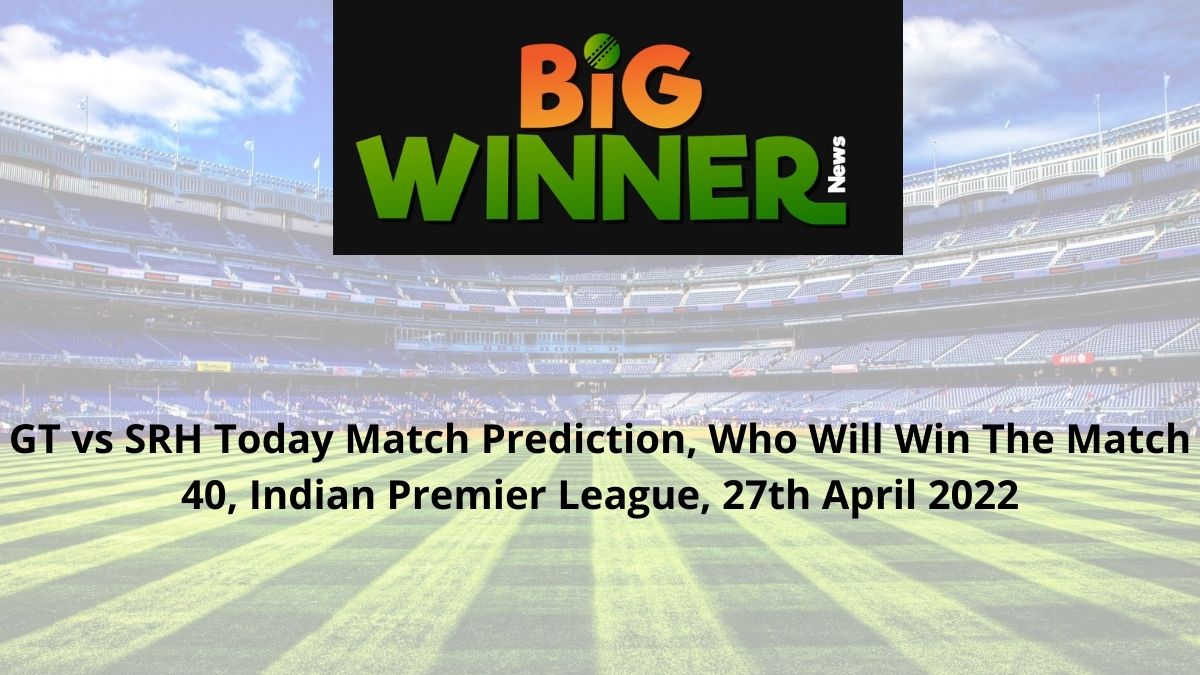 Our Experts bring you the finest today’s match prediction that you can trust. We are here for GT vs SRH, Today Match Prediction, Match 40, Indian Premier League, Online Cricket Betting Tips, which will provide every user with a clear picture of which team and in what aspect they can place their bets.

Gujarat Titans won their 6th match of this season and are sitting at top of the table with 12 points. They won against Kolkata Knight Riders by 8 wickets in the last match with skipper Hardik Pandya scoring his 3rd fifty of this season. Star bowlers Mohammed Shami and Rashid Khan took 2 wickets each with strict economy to guide their team to top.

Gujarat Titans have lost just 1 match this season and that came against today’s opponent in the first reverse fixture. Hyderabad are once again favorites to win this clash with their winning streak extending to 5 matches.

Sunrisers Hyderabad are no longer a dark horse in the title race this season after winning record straight 5th match, which came after losing first 2 opening fixtures. They bowled out Royal Challengers Bangalore to just 68 runs, lowest total this season, while bowling first and then chased down the target easily with 9 wickets remaining. Skipper Kane Williamson has won all the toss decision this season and is expected to win this clash on Wednesday.

The temperature is expected to hover around 32°C on the match-day with 61% humidity and 11 km/h wind speed. There is 1% chance of precipitation during the game.

Wankhede pitch is equally balanced towards batters and bowlers but former are receiving great help from it lately. Teams batting first and second have won 45 matches each in 90 IPL games here. But teams batting first have won last three matches and two times score was past 200 runs, where average is around 160 runs.

Sunrisers Hyderabad are expected to win the match against Gujarat Titans

Gujarat Titans regained their top spot in the league table with 6th win from the opening 7 matches this season. But now face most in-form team in this league, Sunrisers Hyderabad, who are placed just 2 points below in the 2nd position. Hyderabad side won the first reverse fixture of this clash by a big margin of 8 wickets on 11th April. Sunrisers Hyderabad are expected to win this clash again on Wednesday after their big 9 wickets win over Royal Challengers Bangalore in the last match.

The promising Indian opener is having a good season with the Titans but consistency is still an issue so far. He scored two big 80 plus knocks but struggled in last three matches. Gill has scored 207 runs in 7 matches with an average of 29.57 and a strike rate of 151.09.

The 21-year-old Indian youngster is in great form for the Sunrisers this season and has proved why they retained him this year. He scored 47 runs off 28 balls in the last match is leading most-runs chart for SRH this season. Abhishek Sharma has scored 220 runs in 7 matches with an average of 31.42 and a strike rate of 125.71 so far.

The experienced Indians seamer is in great form for the Titans this year with another excellent display in the last match. Shami took 2 wickets against Kolkata Knight Riders in the last match while conceding just 20 runs in 4 overs. He is leading most-wickets chart for GT with 10 wickets in 7 matches with an average of 20.20 and an economy rate of 7.21.

The star Indian pacer played a big part in the last match with 3 wickets while conceding just 10 runs and bowled out Royal Challengers to just 68 runs. He missed majority of the last season due to injury but has made a great comeback this season. Natarajan is leading most-wickets chart for SRH with 15 wickets from the opening 7 matches with an average of 14.53 and an economy rate of 8.07.