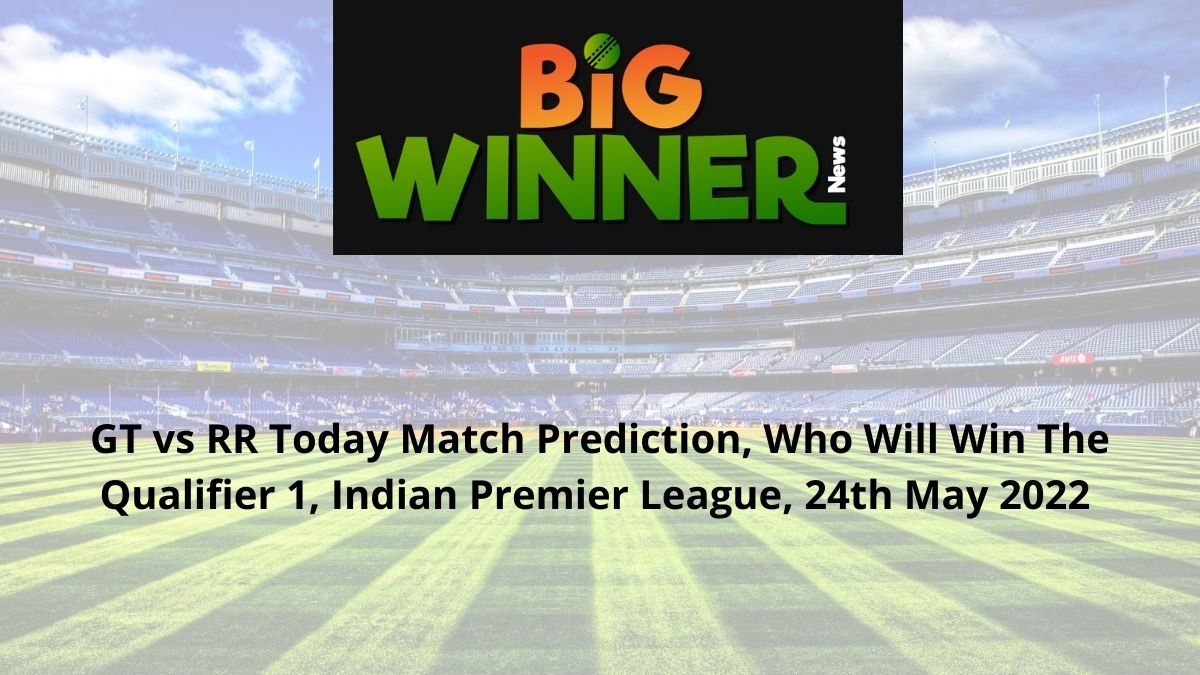 Our Experts bring you the finest today’s match prediction that you can trust. We are here for GT vs RR, Today Match Prediction, Qualifier 1, Indian Premier League, Online Cricket Betting Tips, which will provide every user with a clear picture of which team and in what aspect they can place their bets.

Gujarat Titans finished this season as the group stage toppers with 20 points out of possible 28. They were defeated by Royal Challengers Bangalore in the last match by a big margin of 8 wickets. The Titans scored168 runs while batting first with skipper Hardik Pandya scoring his 4th fifty of this season. But bowlers failed to defend this respectable total with Virat Kohli scoring his second fifty of this season.

The Titans now face 2nd placed Rajasthan Royals in the first qualifier fixture, whom they defeated by 37 runs in the group stage fixture.

Rajasthan Royals won last two fixtures to finish this season in second position and are now favorites to reach the finals with momentum on their side. They beat champions Chennai Super Kings by 5 wickets in the last match. Chennai side scored just 150 runs while batting first with McCoy and Chahal taking 2 wickets with impressive economy rate. The in-form opener Yashasvi Jaiswal scored 59 runs to secure 5 wickets win with just 2 balls remaining.

Rajasthan Royals achieved 18 points to reach the first qualifiers and are favorites to win against the Titans on Tuesday.

The temperature is expected to hover around 32°C on the match-day with 88% humidity and 4 km/h wind speed. There are 10% chances of precipitation during the game.

Eden Garden pitch is well balanced towards batters and bowlers in the past IPL games. This will be the first match of this season being played on this pitch so it is hard to predict the surface. Rain is predicted in the afternoon time so we can expect a very little help for the pace bowlers on Tuesday night.

Rajasthan Royals are expected to win the match against Gujarat Titans

The young Indian opener has enjoyed a mixed season so far but still reached 400 runs milestone this season. Gill started this season with 2 big fifties but struggled for the runs during mid-season. He has made a good comeback with two more fifties lately and is tipped has best batter for the Titans on Tuesday night. Gill has scored 403 runs in 14 matches with an average of 31.00 and a strike rate of 133.88.

The star English opening batter enjoyed a great first half of this season but has struggled in the second half with just one fifty. He has scored 3 centuries and 3 fifties overall this season and is comfortably leading most-runs chart in this tournament. Buttler has scored 629 runs in 14 matches with an average of 49.38 and a strike rate of 146.96 so far.

The star leg spinner reached a milestone of 100 IPL wickets this season after a below average start. He took 2 wickets against Royals Challengers Bangalore and now leading most-wickets chart for GT, ahead of Mohammed Shami. Rashid Khan has taken 18 wickets 14 matches with an average of 21.55 and an economy rate of 6.95.

The star Indian leg-spinner became the highest wickets-taker by a spinner in IPL history with 2 wickets against Chennai Super Kings in the last match. Chahal dominated the group stage fixtures by holding Purple Cap and is likely to won it at the end of this season. Chahal has taken 26 wickets 14 matches with an average of 16.53 and an economy rate of 7.67.