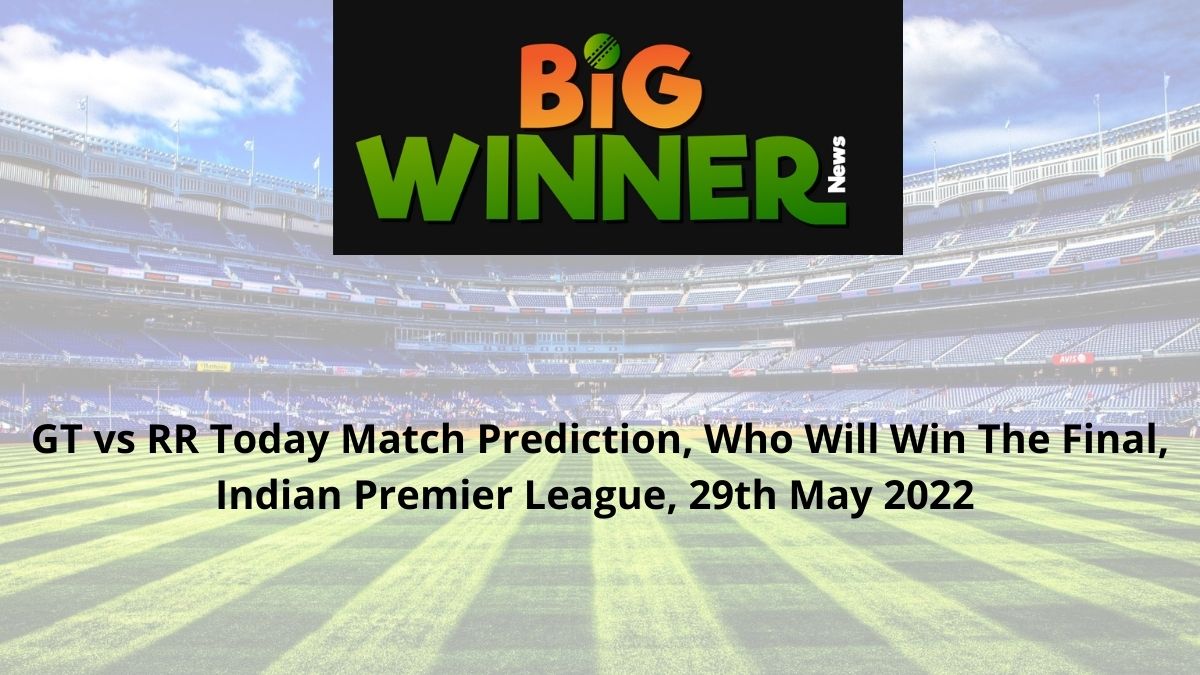 Our Experts bring you the finest today’s match prediction that you can trust. We are here for GT vs RR, Today Match Prediction, Final, Indian Premier League, Online Cricket Betting Tips, which will provide every user with a clear picture of which team and in what aspect they can place their bets.

Gujarat Titans finished this season as a league topper in the group stage fixtures and now deserve to be in the finals. The Titans beat Rajasthan Royals by 7 wickets but just 3 balls remaining in their last match to reach the finals. The Royals scored a big total of 188 runs while batting first with all key bowlers failing with economy rate. But David Miller scored unbeaten 68 runs with 3 consecutive sixes in last over to guide his team to first ever final.

The Titans replaced Lockie Ferguson with Alzarri Joseph in the last match but the West Indies pacer gave away 27 runs in just 2 overs with no wicket. Kiwi pacer is expected to regain his place in starting eleven in the finals. Star Indian pacers Yash Dayal and Mohammed Shami are struggling for the wickets recently and need to step up their game in this final clash on Sunday night.

Rajasthan Royals were unlucky to lose the first qualifier despite scoring a big total in the qualifier one. But they have made a great comeback to reach the final with a dominating win over Royal Challengers Bangalore in their last match. Star pacers Prasidh Krishna and Obed McCoy took 3 wickets each with an economy rate below 6.00 to restrict BLR to just 157 runs. The star opener Jos Buttler scored a record-matching 4th unbeaten century of this season to guide the Royals to 7 wickets win.

The Royals lost both of their previous clashes against the Titans but are favorites to win this final with momentum on their side. Both Jos Buttler and Yuzvendra Chahal are set to win Orange Cap and Purple Cap awards this season after this Sunday’s final clash.

The temperature is expected to hover around 34°C on the match-day with 56% humidity and 13 km/h wind speed. There is 0% chance of precipitation during the game.

Ahmedabad’s pitch is perfectly balanced for both batters and bowlers in the past IPL games. Pitch has a good amount of grass so pace bowlers can dominate this final as we witnessed in 2nd qualifier. The average score on this pitch is 155 runs and only one team have scored past 200 runs, and that came from tonight’s finalist Rajasthan Royals in 2014.

Rajasthan Royals are expected to win the match against Gujarat Titans

The Royals showed great spirit in the second qualifier against Royal Challengers Bangalore to reach the finals after 13 years. Gujarat Titans and Rajasthan Royals finished group stage fixtures in top-two positions and are now set to face off each other in the finals.

The Titans managed to win both group stage and qualifier one clash against Rajasthan Royals but are second favorites to win this final match due to the fantastic form of Jos Buttler. Rajasthan Royals have momentum with them after the latest win against BLR and will be looking for revenge against Titans in the final on Sunday.

The star Indian opener has been on and off this season but still crossed 400 runs mark with some good displays. Gill scored 35 runs off just 21 balls and unfortunate to get run out against tonight’s opponent in the first qualifier. He has scored 438 runs in 15 matches with an average of 31.28 and a strike rate of 136.2.

The star English opening batter started this season with consistent big scores but went through a slow dry spell during mid-season. But he has scored 195 runs in 2 playoff matches and is on the verge of breaking big records of Virat Kohli’s most-runs and most centuries in a single season. Buttler has scored 824 runs in 16 matches with an average of 58.85 and a strike rate of 151.47.

The star leg spinner was instrumental against Rajasthan Royals in the first qualifier. He took no wicket but gave away just 14 runs in his 4 overs spell. Rashid Khan has been very economical once again and will be a key for the Titans to win the title on Sunday. He has taken 18 wickets in 15 IPL matches with an average of 22.38 and an economy rate of 6.73 this season.

The star Indian leg-spinner has been sensational for the Royals since the start. He is dominating Purple Cap race this season and is set to win the award after the final. Chahal has failed to impress in both playoffs fixtures but is tipped to make a great return in the final. He has taken 26 wickets in 16 matches with an average of 19.50 and an economy rate of 7.92.