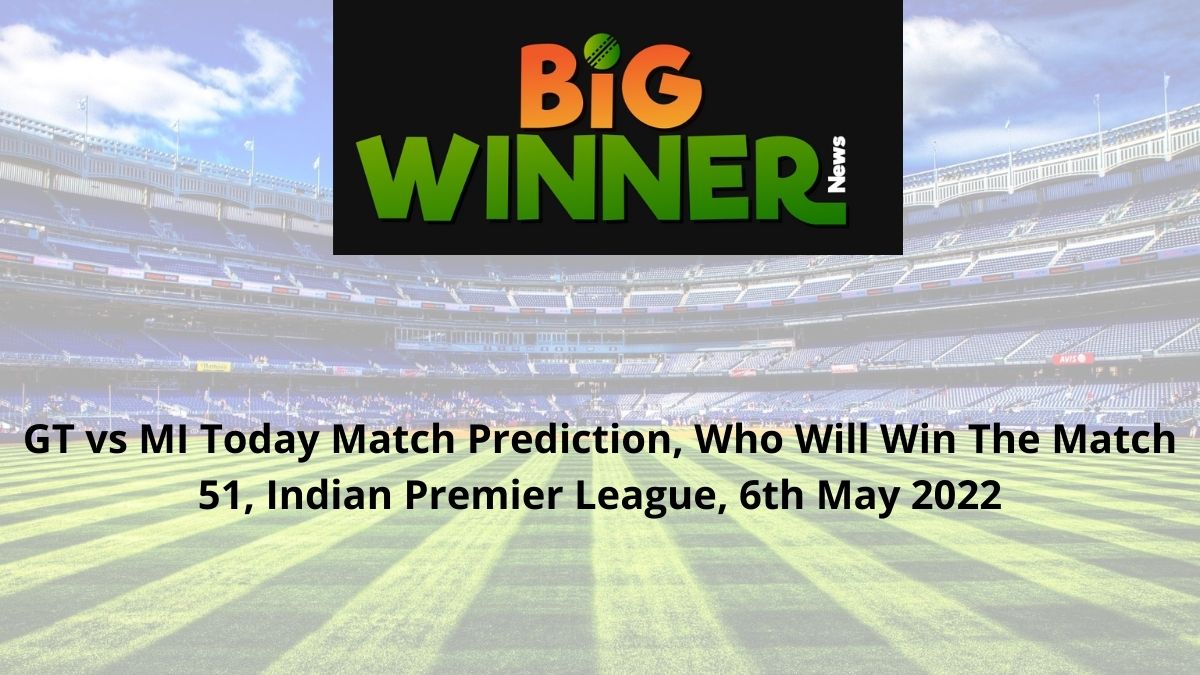 Our Experts bring you the finest today’s match prediction that you can trust. We are here for GT vs MI, Today Match Prediction, Match 51, Indian Premier League, Online Cricket Betting Tips, which will provide every user with a clear picture of which team and in what aspect they can place their bets.

Gujarat Titans lost their only 2nd match of this season after a surprise defeat against Punjab Kings in the last match. Punjab Kings restricted the Titans to just 148 runs in 20 overs, with Sai Sudharsan scoring unbeaten 65 runs. Then Titans bowlers failed to defend this low total and lost a game by 8 wickets, with Liam Livingstone scoring 28 runs in Mohammed Shami’s last over.

Gujarat Titans are placed at top of the position in the league table with 16 points from the opening 10 matches and are a win behind to secure top-four position.

Despite their last win, Mumbai Indians are struggling at bottom of the league table with 2 points from the opening 9 matches. Their hopes to reach the qualifiers round are already over but will try to win remainder of matches.

The temperature is expected to hover around 31°C on the match-day with 82% humidity and 12 km/h wind speed. There is 1% chance of precipitation during the game.

Brabourne pitch is excellent for the batters in any t20 game but bowlers are also getting some help lately. There is no grass available but late dew plays a big part in match results. Royal Challengers Bangalore scored 68 runs on this pitch last week, but apart from that, teams have consistently scored above average mark 170 runs.

Gujarat Titans are expected to win the match against Mumbai Indians

Gujarat Titans lost their only 2nd match of this season in their last clash against Punjab Kings but are still placed at top of the table. Mumbai Indians registered their first win of this season in their last match and are placed in 10th position in the league table. This will be a clash of first versus last team in the league but we except a close-encounter on Friday with the Titans getting 2 points.

The young Indian opener is struggling for the consistency lately after a great start to this season. He scored two big fifties this season but has failed to play up to his potential in last few matches. Gill has scored 269 runs in 10 matches with an average of 26.9 and a strike rate of 137.94.

Star Indian middle-order batter was promoted to number three role in the last match and he scored another fifty to guide Mumbai Indians to the first win of this season. Yadav has scored 3 fifties this season and has been tipped as best batsman for his side on Friday night. He has scored 290 runs in 7 matches with an average of 48.33 and a strike rate of 147.20.

The experienced Indian seamer has been in sensational form for the Titans this season. He took just 1 wicket in the last match and gave away 28 runs in his last over as well. But Shami has made good comebacks whenever he went expensive in the previous game. He is leading most-wickets chart for the Titans with 15 wickets in 10 matches with an average of 21.53 and an economy rate of 8.07 so far.

The star Indian pacer is struggling for the wickets this season but is still one of the best bowler in this league. He needs just one match to turn around his form after missing wickets in 6 matches this year. Bumrah has taken only 5 wickets in 9 matches with an average of 51.20 and an economy rate of 7.45.