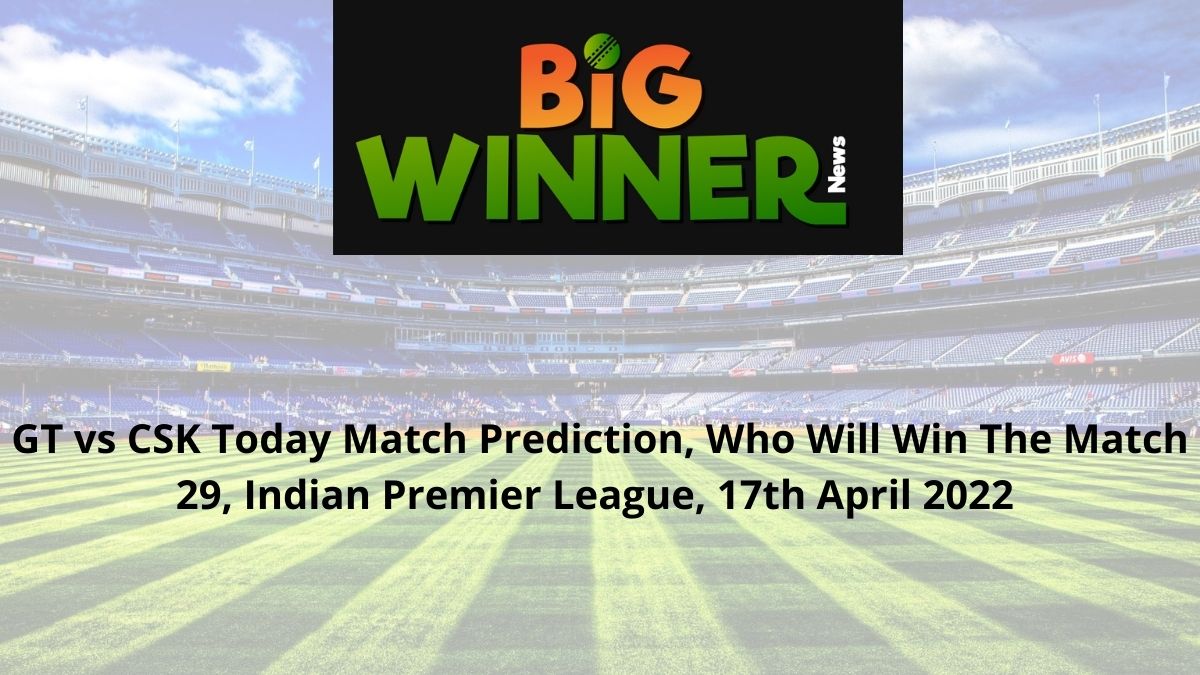 Our Experts bring you the finest today’s match prediction that you can trust. We are here for GT vs CSK, Today Match Prediction, Match 29, Indian Premier League, Online Cricket Betting Tips, which will provide every user with a clear picture of which team and in what aspect they can place their bets.

Gujarat Titans are enjoying a dream start to their IPL journey with 4 wins from the opening 5 matches. They beat Rajasthan Royals by a big margin of 37 runs and replaced them at the top position in the league table just 2 days ago. GT scored 192 runs while batting first where captain Hardik Pandya scored an unbeaten 87 runs off just 52 balls. They Lockie Ferguson and debutant Yash Dayal took 3 wickets each to restrict RR for 155 runs in 20 overs.

English pacer Chris Jordan failed to impress against RCB and is expected to be replaced by Dwaine Pretorius for this Sunday clash.

The temperature is expected to hover around 33°C on the match-day with 54% humidity and 5 km/h wind speed. There are 02% chances of precipitation during the game.

MCA pitch is equally balanced for both batters and bowlers in t20 games. There is minimum grass available but dew makes it tough for the pacers in the night fixtures. Average score on this pitch remains around 155 runs but we are expecting a high-scoring clash on Sunday.

Chennai Super Kings registered their first win of the season in the last match after losing first four fixtures. This will surely boost the morale before this big fixture against the in-form Gujarat Titans. Newcomers Gujarat Titans reached the top position in the league table with a big win over Rajasthan Royals in the last match. Both teams’ odds for winning this match are equal but CSK’s latest win gives them an extra edge going into this Sunday encounter.

The star Indian opener was signed by Gujarat Titans before the mega-auction for a big chunk of money. And Gill has proved his worth already this season and now tipped as best batsman for his side on Sunday. Gill has scored 200 runs in 5 matches with an average of 40.00 and a strike rate of 152.67.

The former Indian international star is in sensational form this year with another big fifty in the last match. He scored 88 runs off just 50 balls against Royal Challengers Bangalore to guide his team to first win this season. Uthappa has scored 194 runs in 5 matches with an average of 38.80 and a strike rate of 163.02 so far.

The star New Zealand speedster was excellent against Rajasthan Royals with 3-wickets haul in the last match. He also took 4 wickets against Delhi Capitals in the 2nd match of this season. Ferguson is leading most-wickets chart for his team with 8 wickets in 5 matches with an average of 19.25 and an economy rate of 7.70.

West Indies veteran pacer made the history this season by becoming the highest wickets-taker in IPL history. He remains only CSK bowler to take 5 plus wickets this season despite playing 5 team fixtures. Bravo has taken 7 wickets in 5 matches with an average of 22.57 and an economy rate of 8.94 this season.