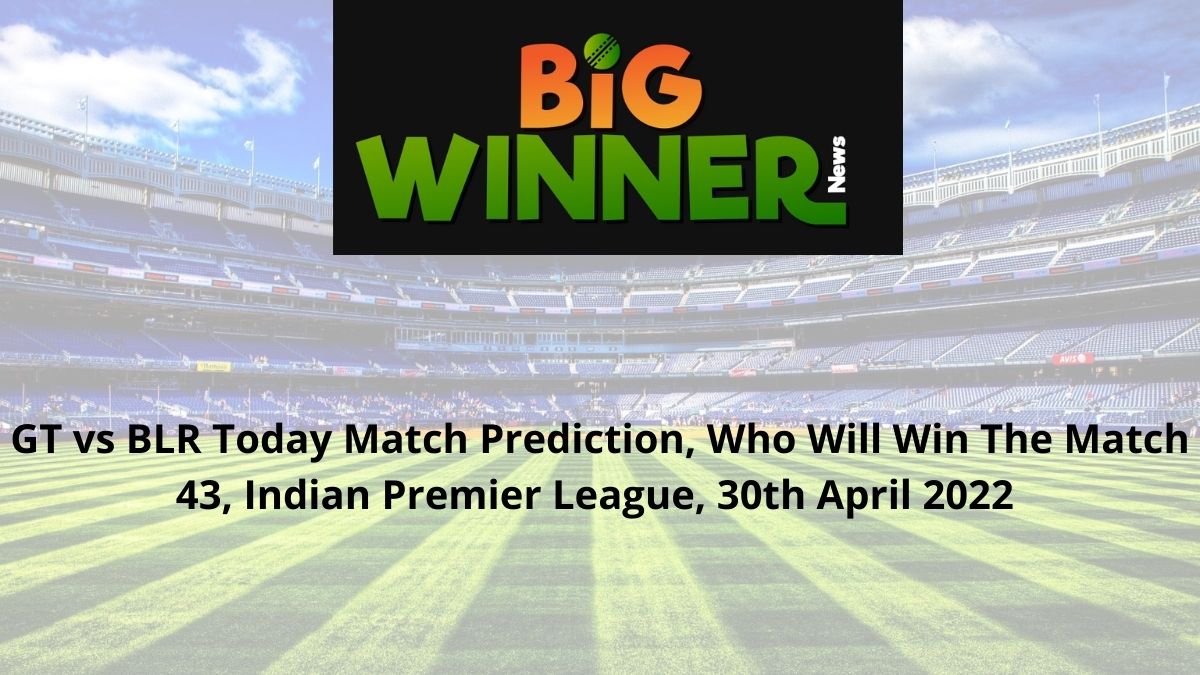 Our Experts bring you the finest today’s match prediction that you can trust. We are here for GT vs BLR, Today Match Prediction, Match 43, Indian Premier League, Online Cricket Betting Tips, which will provide every user with a clear picture of which team and in what aspect they can place their bets.

Gujarat Titans registered their 7th win from the opening 9 matches this season and comfortably sit at top of the league table. The Titans beat Sunrisers Hyderabad in a thriller clash with Rashid Khan scoring six on the last ball. The Sunrisers scored 195 runs while batting first with Mohammed Shami taking 3 wickets. Then the Titans managed to win another match in last over with the help of Rashid Khan and Rahul Tewatia’s heroics in last two overs.

Royal Challengers Bangalore are struggling for the consistency this season after an another big defeat in the last match. They restricted in-from Rajasthan Royals to just 148 runs while bowling first. But once again, their batting line-up failed to perform under pressure with just 115 runs to suffer 29 runs defeat.

Despite these two big defeats, Royal Challengers Bangalore are placed in 5th position in the league table with 10 points from the opening 9 matches.

The temperature is expected to hover around 33°C on the match-day with 62% humidity and 15 km/h wind speed. There is 1% chance of precipitation during the game.

Brabourne pitch is excellent for the batters in any t20 game and teams are regularly crossing average mark of 170 runs this season. But in the last match on this pitch, Royal Challengers Bangalore were bowled out to just 68 runs, lowest score here.

Royal Challengers Bangalore suffered two consecutive defeats after a fantastic start to this season. Both of their last two defeats occurred after poor displays from the batsman and now they face one of the strongest bowling unit in form of Gujarat Titans. The Titans are flying high with 16 points already this season and will be looking to keep their momentum on for the rest of the matches.

The star Indian youngster started this season with two big fifties but has struggled to score big runs lately. He got a good start in the last match but once again failed to convert into a big score. Shubman Gill has scored 229 runs in 8 matches with an average of 28.62 and a strike rate of 142.23.

South African veteran and team’s new skipper is leading by example this season with consistent good performances. He is only BLR player to score 2 fifties so far and also leading most-run chart this year. Faf du Plessis has scored 278 runs in 9 matches with an average of 30.80 and a strike rate of 128.11.

The star Indian pacer was sensational against Sunrisers Hyderabad and has been a key player for the Titans in their dream start to this season. He took 3 big wickets of Kane Williamson, Rahul Tripathi, and Nicholas Pooran against the Sunrisers. Shami is leading most-wickets chart for his team with 13 wickets in 8 matches with an average of 18.53 and an economy rate of 7.53.

Australian seamer continues to make his mark with Bangalore side since joining this season with another spectacular spell in the last match. He took 2 wickets against Rajasthan Royals while conceding just 19 runs and bowled one maiden over as well. Hazlewood has taken 10 wickets in just 5 IPL matches with an average of 13.60 and an economy rate of 7.50 this season.