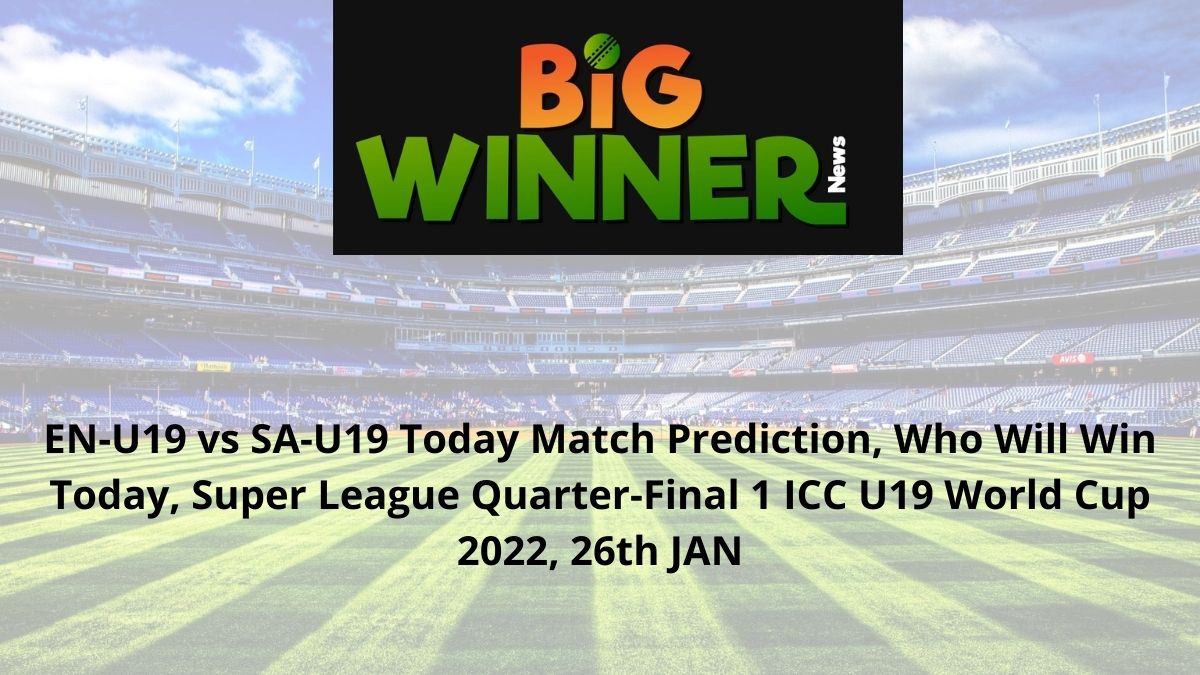 Our Experts bring you the finest today’s match prediction that you can trust. We are here for EN-U19 vs SA-U19 Today Match Prediction, ICC U19 World Cup 2022, Online Cricket Betting Tips, which will provide every user with a clear picture of which team and in what aspect they can place their bets.

England U19 team won all of their three group stage fixtures with ease and will enter tonight’s match as a world cup favourites. EN-U19 won their last match against UAE-U19 by 189 runs where captain Tom Prest scored 154 runs by himself, and Rehan Ahmed took 4 wickets.

Top Batsmen of England U19

Top Bowlers of England U19

South Africa juniors won two of their three group stage fixtures, where they lost against tournament favourites India U19 by 45 runs. They finished the group B behind India. In their last match, they won against Ireland U19 by 169 runs with captain George Van Heerden scoring 111 runs and Matthew Boast taking 3 wickets.

Top Batsmen of South Africa U19

Top Bowlers of South Africa U19

The temperature is expected to hover around 26°C on the match-day with 90% humidity and 29 km/h wind speed. There are 00% chances of precipitation during the game.

Sir Vivian Richards Stadium pitch is very slow and bowlers will dominate this fixture for sure. Average first inning score is just 126 and second inning score is 102 so any decent total of 140 will be easy to defend for the bowlers.

England U19 expected to win the match against South Africa U19

England U19 are favourites to win against South Africa U19 side and clearly leading the odd on betting platforms as well. England juniors have won each of their three matches in these tournaments with dominant displays. They scored 360 and 320 runs while batting first and bowled out Bangladesh to 97/10 in their first match. South Africa U19 side showed their quality against Uganda and Ireland but India exposed their weakness in their middle-order batting line-up. SA-U19 have won their last three meetings against EN-19 but will find it tough to win on Wednesday.

England captain scored 154 runs in the last match, the highest total of this world cup so far. Prest is ranked 2nd in the most runs charts and is just 14 runs behind leader Dewald Brevis.

Middle-order right-handed batsman is leading most wickets charts in this world cup with 254 runs in 3 matches. He has scored 1 century and 2 fifties and remains the most consistent batsman in this tournament.

England pacer has taken whooping 10 wickets in 3 matches so far and ranks 2nd in most-wickets charts in this tournament. Boyden has bowled 5 maiden overs so far, most in the tournament and has maintained an economy ate of 2.91, the lowest among top-ten bowlers in this world cup.

The 18-year-old right-arm pacer has taken 7 wickets in 3 matches with an average of 12.57 and an economy rate of just 4.00. He has been tipped as best bowler for SA-U19 on betting platforms.