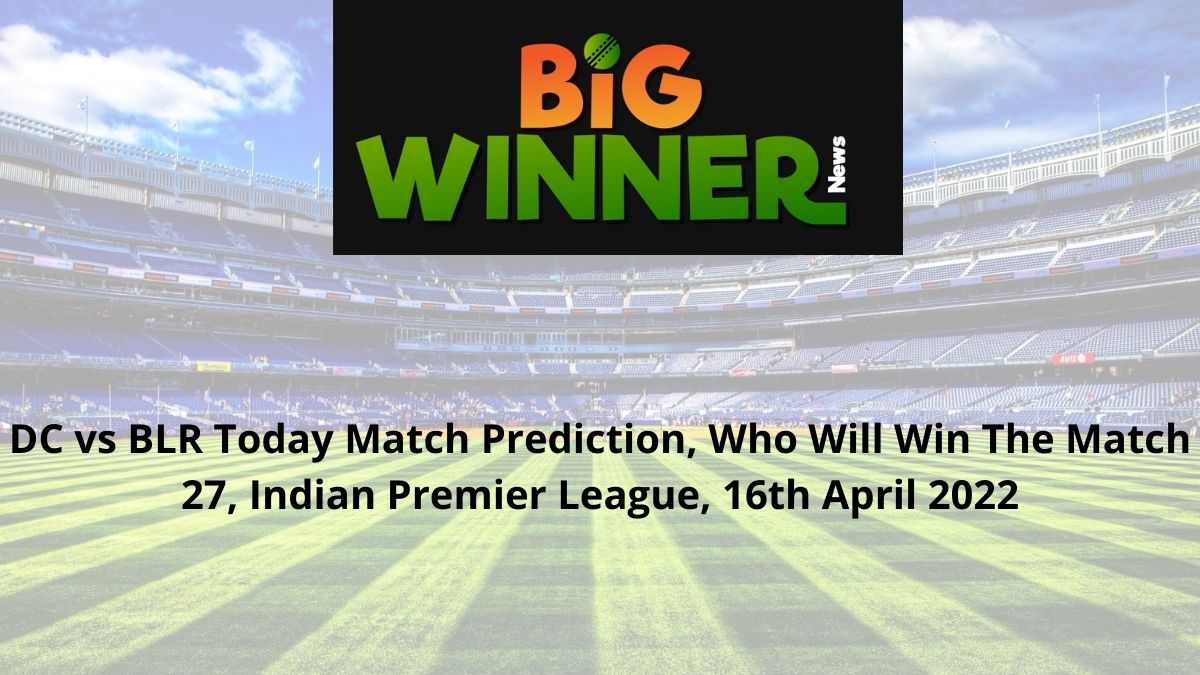 Our Experts bring you the finest today’s match prediction that you can trust. We are here for DC vs BLR, Today Match Prediction, Match 27, Indian Premier League, Online Cricket Betting Tips, which will provide every user with a clear picture of which team and in what aspect they can place their bets.

Delhi Capitals won their last match with a dominating display against Kolkata Knight Riders. They scored a big total of 215 runs while batting first and bowled out KKR to just 171 runs. Kuldeep Yadav took 4 wickets to earn man of the match award where Prithvi Shaw and David Warner scored half-centuries.

Star Australian all-rounder Mitchell Marsh is expected make his debut for the Capitals in this match but there is a doubt over a fitness of key pacer Anrich Nortje.

Royal Challengers Bangalore lost their 2nd match of this season after a 23-run defeat against traditional rivals Chennai Super Kings in the last match. They won the previous 3 matches in a row after losing an opener. Bangalore is placed in 6th position with 6 points from the opening 5 matches so far.

RCB are looking for title contenders this season but their bowling unit is struggling for consistency. Star Indian pacer Mohammad Siraj is struggling for the wickets and proved very expensive so far. Death overs specialist Harshal Patel missed the last match due to family reasons and expected to miss two more fixtures. Australian pacer Josh Hazlewood joined the squad in the last match and is expected to lead their poor bowling unit this season.

The temperature is expected to hover around 30°C on the match-day with 79% humidity and 8 km/h wind speed. There are 2% chances of precipitation during the game.

Wankhede’s pitch is equally balanced for the batsmen and bowlers in t20 games but spinners are getting more help this year. The ball is turning nicely from the start and we have witnessed leg-spinners bowing in the powerplay overs. The average score on this pitch is around 160 runs in IPL history but we can expect a high-scoring game on Saturday night.

Royal Challengers Bangalore lost against Chennai Super Kings in the last match but there were plenty of positives from that defeat. Delhi Capitals enter this fixture after big win over Kolkata Knight Riders in their last fixture. BLR have dominated head-to-head record against DC in the past but latter have won 3 of their last 5 matches. Last season, Bangalore won both of their respective matches against Delhi and are favorites to win on Saturday night.

The star Australian opening batsman returned to IPL action with a bang after missing first two matches due to national duties. Warner scored 61 runs off 45 balls against Kolkata Knights Riders in the last match. He has scored 65 runs in 2 IPL matches with an average of 32.50 and a strike rate of 114.03.

Former captain and face of the team Virat Kohli is looking in good form this season with two 40-plus run knocks in the first 5 matches. He scored just 1 run against Chennai Super Kings in the last match but is still tipped as the best player for the upcoming clash against Delhi Capitals. Kohli has scored 107 runs in 5 matches with an average of 26.75 and a strike rate of 132.09 this year.

The star Indian leg-spinner has emerged as a surprise package for the Capitals this season with consistently good performances. He took 4 wickets against Kolkata Knight Riders in the last match and is leading the most-wickets chart for his team. Kuldeep Yadav has taken 10 wickets in just 4 IPL matches with an average of 11.60 and an economy rate of 7.40 so far.

The star Sri Lankan spinner cost a big chunk of money in the IPL mega auction but he is proving to be a worthy buy for Royal Challengers Bangalore. Hasaranga ranks 6th in ICC T20 bowlers chart and is in contention to win the Purple Cap race this season. He has taken 10 wickets in 5 matches with an average of 15.50 and an economy rate of 8.50 this year.