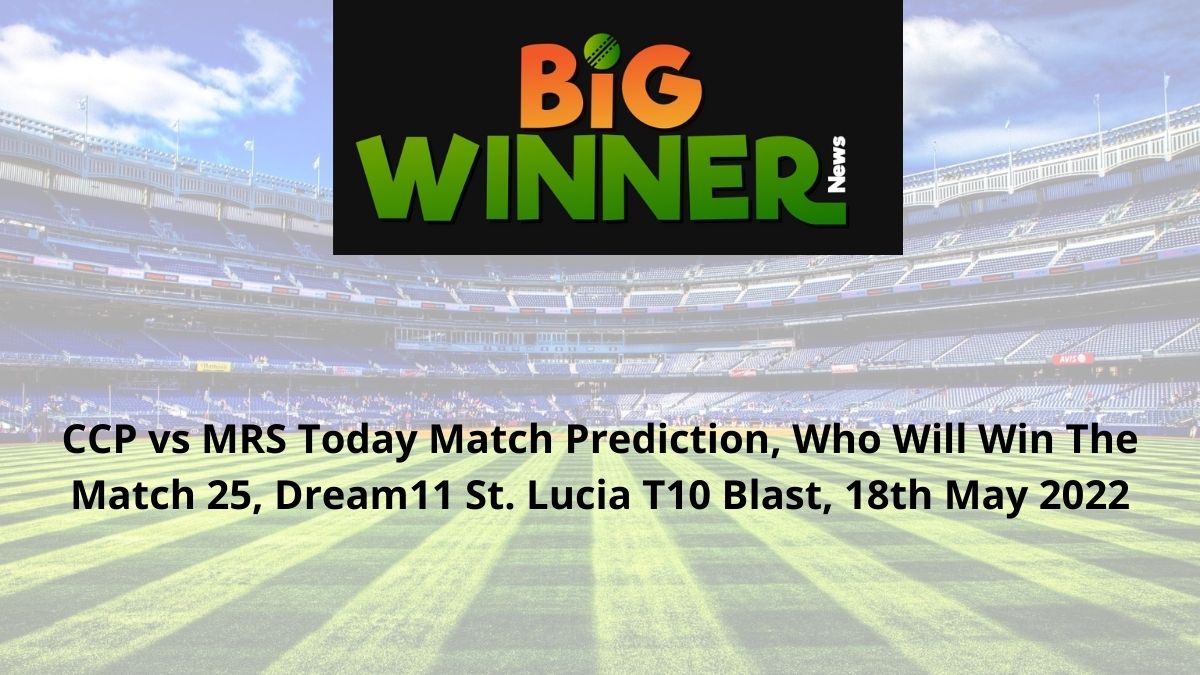 Our Experts bring you the finest today’s match prediction that you can trust. We are here for CCP vs MRS, Today Match Prediction, Match 25, Dream11 St Lucia T10 Blast 2022, Online Cricket Betting Tips, which will provide every user with a clear picture of which team and in what aspect they can place their bets.

Choiseul Coal Pots won their third consecutive match this season with a big win over CCMH in the last match. Jason Simon scored 43 runs off to put up a target of 89 runs on the scoreboard and then Alvinaus took 2 wickets for 12 runs to register 14 runs win.

CCP are now placed in 1st position in the league table with 6 points from the opening 3 matches. They won St Lucia T10 Blast tournament last year and are likely to win it again this season as well.

MRS are now placed in 2nd position in the league table with 4 points from the opening 3 matches.

The temperature is expected to hover around 27°C on the match-day with 75% humidity and 24 km/h wind speed. There are 03% chances of precipitation during the game.

Daren Sammy pitch is excellent for the explosive batters as balls come nicely on the bat without any movement. But now at the end of this tournament, pacers are getting more and more wickets with extra pace and bounce lately.

The experienced wicket-keeper batsman continues his last season’s form with back to back impressive knocks. He scored a big fifty in the season opener against MVC and then 43 runs off just 25 balls against CCMH in the last match. Jason Simon ranks 2nd in most-runs chart with 122 runs from the opening 3 matches with an average of 40.66.

The star opening West Indies explosive batter has been sensational in all of the three opening matches. He scored 60 against GICB, 47 against BLS and 37 runs off just 17 balls against SCSS in the last match. Johnson Charles is leading most-runs chart in this tournament with 144 runs from 3 matches with an average of 72.00.

The 30-year-old all-rounder has been sensational for Choiseul Coal Pots with consistent wickets-taking performances so far. He took 2 wickets against CCMH in the last match and has taken wickets in every matches this season. Audy Alexander ranks 2nd in most-wickets chart in this tournament with 5 wickets in 3 innings with an average of 6.80.

The 27-year-old pacer started this season with a best bowling spell of his career. He took 4 wickets while conceding just 5 runs against VFNR in the opening match and was economical against MVC in the last match with just 8 runs. Jamal Lesmond has taken 4 wickets in 2 matches from the opening 2 matches with an average of 3.25.