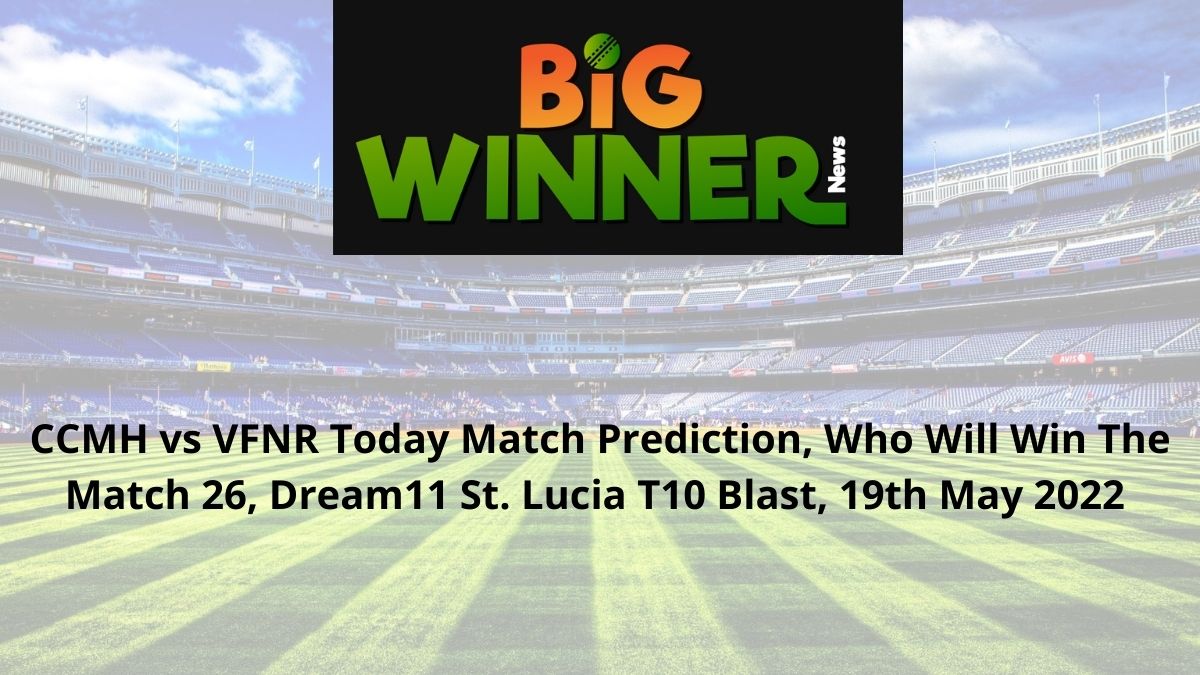 Our Experts bring you the finest today’s match prediction that you can trust. We are here for CCMH vs VFNR, Today Match Prediction, Match 26, Dream11 St Lucia T10 Blast 2022, Online Cricket Betting Tips, which will provide every user with a clear picture of which team and in what aspect they can place their bets.

Central Castries Mindoo Heritage are having a very inconsistent tournament so far this season. They lost a very important clash against CCP by 14 runs in the last match. CCP scored 88 runs while batting first with Jaden Elibox taking 2 wickets but batsman failed to reach the target and were restricted to just 74 runs in 10 overs.

Now Central Castries Mindoo Heritage are placed in 3rd position in the group B with just 3 points from the opening 3 matches.

Vieux Fort North registered their first match of this season with a big win over MVC in the last fixture. Bowlers failed to take any single wicket as MVC scored 103 runs while batting first with a wicket came as run out from Dexter Solomon. But Dane Edward single-handedly chased-down this big total with unbeaten 65 runs knock off just 27 balls.

With this win, VFNR are placed in 4th position in the group B table with 2 points from the opening 3 matches. They are unlikely to finish this season in top-two positions even if they win this clash against CCMH on Wednesday.

The temperature is expected to hover around 27°C on the match-day with 75% humidity and 27 km/h wind speed. There are 06% chances of precipitation during the game.

Daren Sammy pitch is scheduled for the all 30 matches this season so it was expected a slow one for the last few matches. With grass grown, pacers are getting a good help and dominated wickets percentage to almost 80%.

The 18-year-old all-rounder is showing his potential this season with good consistent displays with bot bat and ball. He scored 48 runs off just 23 balls against MVC but struggled with bat against CCP in the last match. Jaden Elibox has scored 51 runs in 3 matches and is leading most-run chart for CCMH this season.

The 22-year-old explosive youngster played his one of the best inning of his career in the last match against MVC. He scored 65 runs off just 27 balls to guide side to the first win of this season. Dane Edward ranks 3rd in most-runs chart in this tournament with 102 runs in 4 matches with average of 51.00.

The experienced pacer has been excellent for CCMH this season with his accuracy and strict economy rate spell. He took 2 wickets each against MRS and MVC and gave away just 9 runs against CCP in the last match. Dillan John has taken 4 wickets in 3 matches with an average of 10.00.

The 25-year-old all-rounder is only consistent bowlers for VFNR this season and demands more contribution from other players as well. He took 2 wickets against IDX but failed to get any in the last match. Rick Moses is leading most-wickets chart for VFNR with 4 wickets from 5 innings with an average of 20.50.