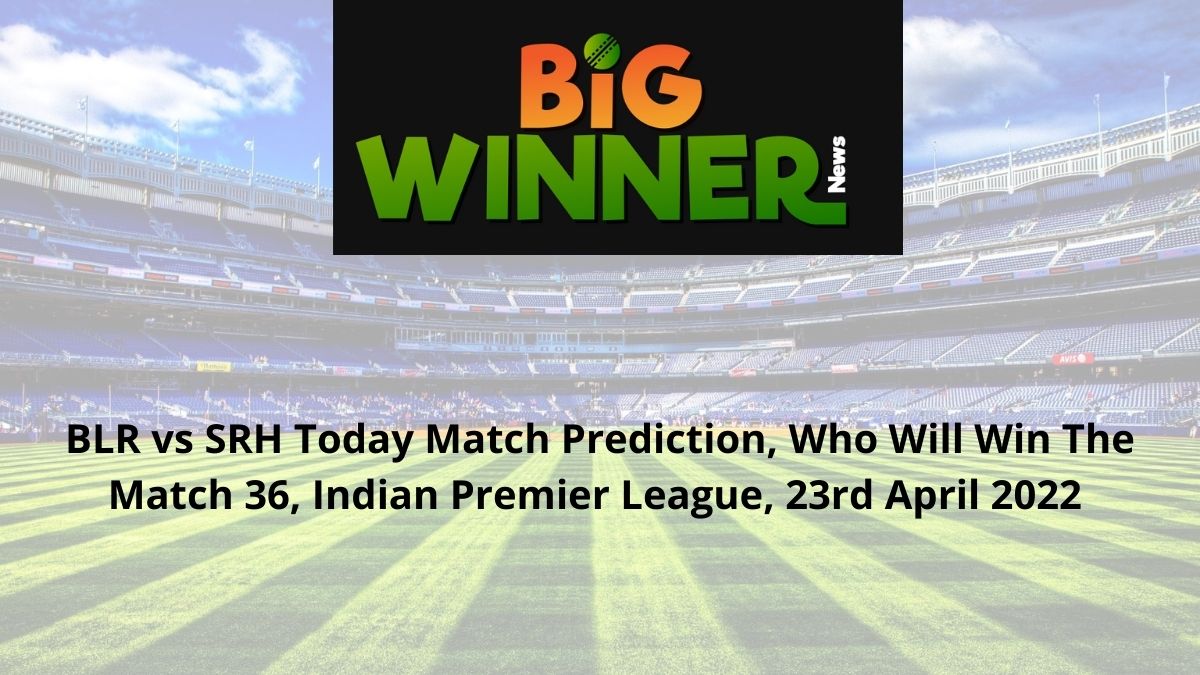 Our Experts bring you the finest today’s match prediction that you can trust. We are here for BLR vs SRH, Today Match Prediction, Match 36, Indian Premier League, Online Cricket Betting Tips, which will provide every user with a clear picture of which team and in what aspect they can place their bets.

Royals challengers Bangalore reached to 2nd position in the league table with a big over Lucknow Super Giants in the last match. They scored 181 runs while batting first with skipper scoring an impressive knock of 96 runs off 64 balls. Then Australian pacer Josh Hazlewood took 4 wickets to restrict Super Giants to just 163 runs.

BLR are now placed in 3rd position in the league table with 10 points from the opening 7 matches with 5 wins and just 2 defeats.

Sunrisers Hyderabad registered their 4th consecutive win with a big victory against Punjab Kings in the las match. The Sunrisers lost the opening 2 matches of this season but won last four matches, two by 7 wickets and two by 8 wickets. They bowled out Punjab Kings to just 151 runs while bowling first and then chased down this target with 7 wickets 7 balls remaining.

Star all-rounder Washington Sundar missed last two matches to the injury but is tipped to return to face mighty BLR side. He is expected to replace Jagadeesha Suchith in the starting eleven and pick-up where he left his impressive form.

The temperature is expected to hover around 32°C on the match-day with 65% humidity and 7 km/h wind speed. There is 0% chance of precipitation during the game.

Brabourne pitch is excellent for the batters in the past and teams are scoring big runs in both innings so far. Rajasthan Royals scored highest runs of 217 on this pitch in the last match and Kolkata Knight Riders score 210 in the same clash. There is no grass available on this pitch and dew plays a big part in the evening games.

Both Royal Challengers Bangalore and Sunrisers Hyderabad are in great form with respective wins in last two matches. Royals Challengers Bangalore beat Lucknow Super Giants to register their fifth win of this season. Sunrisers Hyderabad registered their 4th consecutive win of the season with a big win over Punjab Kings in the last match. Both teams won their respective fixture against each other last season but form of BLR batting unit makes them favorites to win this Sunday night clash.

The veteran South African opener and new skipper of Royal Challengers Bangalore continues his last year’s form this season as well. Du Plessis finished last season as runner-up in Orange Cap race and now is leading the most-wickets chart for BLR with 250 runs from the opening 7 matches with an average of 35.71 and a strike rate of 132.27.

The experienced South African batsman is in great form for the Sunrisers this season. He has scored 2 fifties and remained not out on 4 occasions out of his 5 innings so far. Markram, including unbeaten 41 runs off 30 balls in the last match. Markram has scored 190 runs in just 5 innings with an average of 190.00 and a strike rate of 150.79.

The star Australian seamer has changed the course for the BLR this season despite missing first three matches. Hazlewood is only player in the world to rank in top-ten of ICC best bowlers chart in all three formats. He has taken 8 wickets in just 3 matches with an average of 10.75 and an economy rate of 7.16.

The star Indian death-over specialist missed the majority of the last season due to a leg injury but has been sensational on his return this season. Natarajan is contention for the Purple Cap this season and is tipped as best bowler for the Sunrisers ahead of the likes of Bhuvneshwar Kumar and Umran Malik. Natarajan has taken 12 wickets from the opening 6 matches with an average of 17.33 and an economy rate of 8.33 this season.