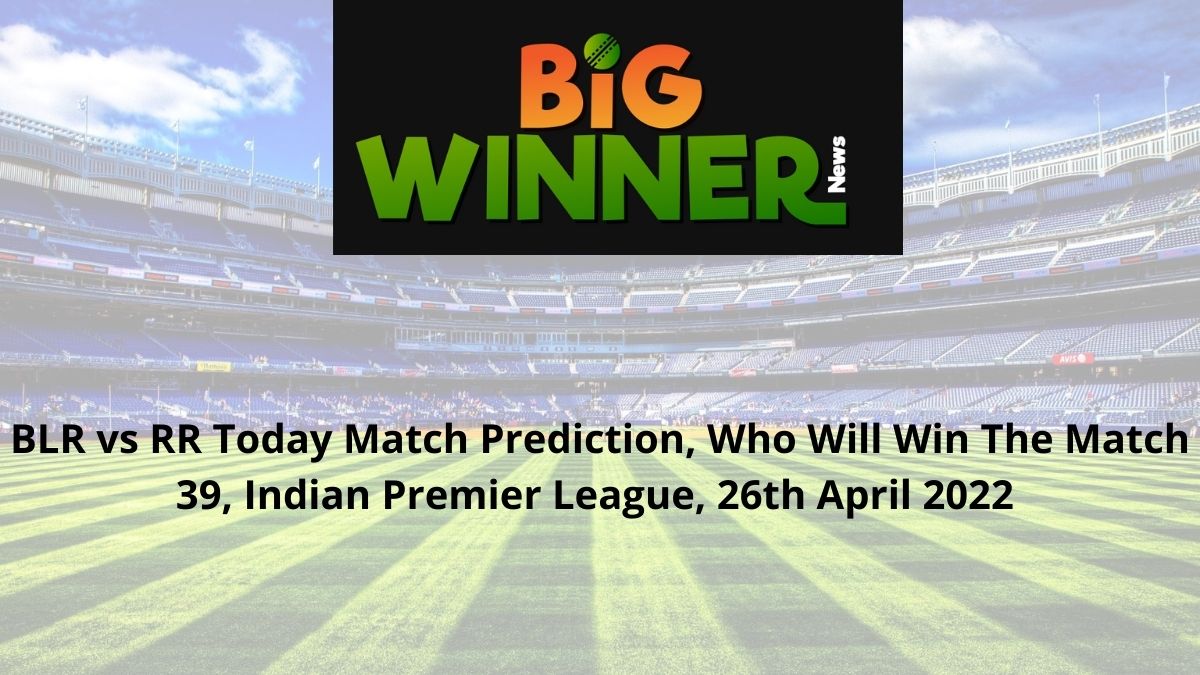 Our Experts bring you the finest today’s match prediction that you can trust. We are here for BLR vs RR, Today Match Prediction, Match 39, Indian Premier League, Online Cricket Betting Tips, which will provide every user with a clear picture of which team and in what aspect they can place their bets.

Royals challengers Bangalore suffered an heavy loss against Sunrisers Hyderabad in the last match which coast them their 2nd position in the league table. They were bowled out to just 68 runs while batting first and then SRH chased down the target with 9 wickets remaining. This was huge blow for their title challenge preparation after a very good start to this season. Now Royal Challengers Bangalore are placed in 5th position in the league table with 10 points from the opening 8 matches.

Rajasthan Royals continue to dominate this season with another big win against Delhi Capitals in the last match. They scored 222 runs while batting first, thanks to another big century from in-form star Jos Buttler. Then they restricted the Capitals to just 207 runs to register 15 runs win. This win led them to 3rd position in the league table and now they are facing BLR, against whom they suffered this season’s first defeat.

The Royals are now placed in 3rd position in the league table with 10 points from the opening 7 matches, with 5 wins, and 2 defeats.

The temperature is expected to hover around 35°C on the match-day with 41% humidity and 4 km/h wind speed. There are 4% chances of precipitation during the game.

MCA pitch was well balanced for both batters and ballers in t20 games in the past but former are receiving more help this season. Pitch is little slow compared to other IPL venues and average score on this pitch remains around 155 runs. In the last match, both teams scored around 170 runs with very little movement on the ball.

Rajasthan Royals are totally different beast this season with very strong bating and balling performances so far. Royal Challengers Bangalore are also enjoying a good spell this season but suffered an unexpected big defeat against SRH in the last match. They also defeated the Royals by 4 wickets in the last over in the first reverse fixture. But RR are favorites to win this clash due to consistent impressive displays from Jos Buttler and Yuzvendra Chahal.

The former South African skipper missed his century by just 4 runs against Lucknow Super Giants but scored just 5 runs against Sunrisers Hyderabad in the last match. Faf de Plessis is the only in-form opening-order batsman for the Challengers this season with Virat Kohli and Anuj Rawat struggling lately. He is leading most-wickets chart for BLR with 255 runs in 8 matches with an average of 31.87 and a strike rate of 130.10 this season.

English wicket-keeper batsman is in rich vein of form with 3rd century of this season in the last match. Buttler has scored 3 centuries and 2 fifties from the opening 7 matches already and is tipped to easily win Orange Cap this season. He has scored 491 runs in 7 matches with an average of 81.83 and a strike rate of 161.51.

Last season’s Orange Cap holder continues his hot form this season despite some personal issues. He took only wicket for the team in the last match where bowlers had just 68 runs to defend. Harshal Patel has taken 9 wickets in 7 matches with an average of 21.44 and an economy rate of 7.42.

The star Indian leg-spinner is in form of his life and is set to face his former team on Tuesday. Chahal took 2 wickets while conceding just 15 runs in this first reverse match and also run-out Virat Kohli. He is currently wearing Purple Cap thanks to his hat-trick with 5 wickets against Kolkata Knight Riders last week. Chahal has taken 18 wickets in just 7 matches with an average of 11.33 and an economy rate of 7.28 so far.