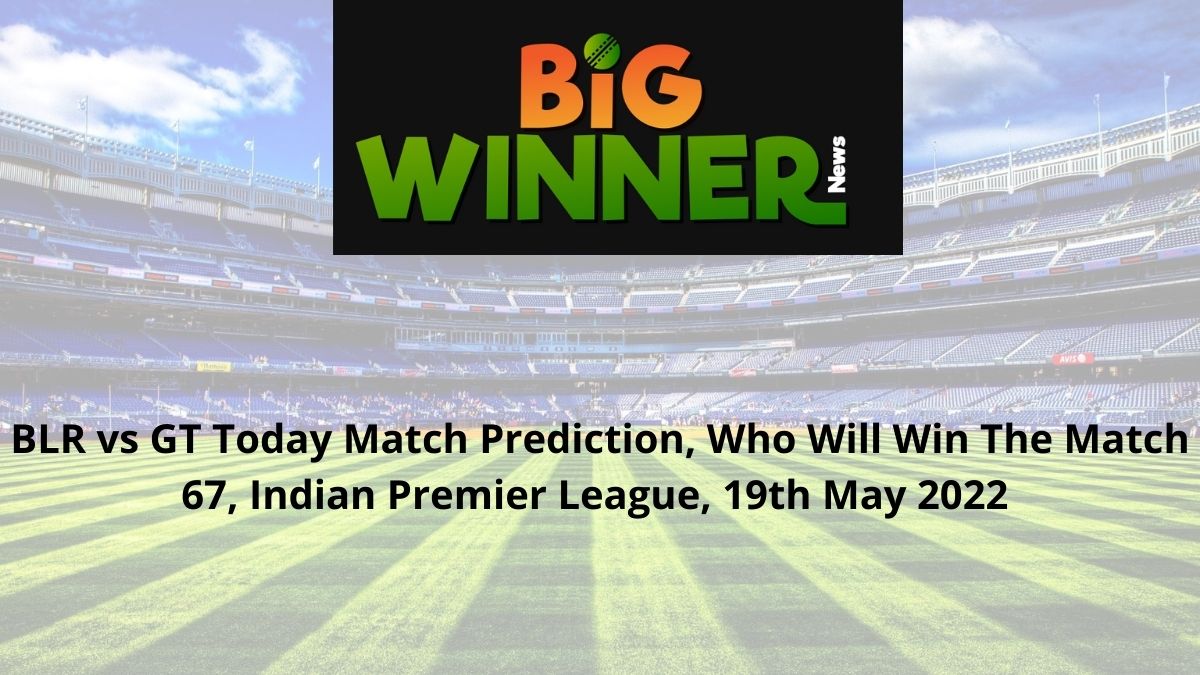 Our Experts bring you the finest today’s match prediction that you can trust. We are here for BLR vs GT, Today Match Prediction, Match 67, Indian Premier League, Online Cricket Betting Tips, which will provide every user with a clear picture of which team and in what aspect they can place their bets.

Royal Challengers Bangalore lost a very important clash against Punjab Kings in the last fixture. PBKS scored a big total of 209 runs despite some impressive spells from Wanindu Hasaranga and Harshal Patel. Batter failed to reach this huge target and were restricted to just 155 runs in 20 overs.

Gujarat Titans beat champions Chennai Super Kings in their last clash and secured top-position in the league table as well. Chennai Super Kings managed to score only 133 runs despite having 5 wickets in hand. Then veteran opener Wriddhiman Saha scored another unbeaten fifty to guide GT to 7 wickets win.

The Titans now have 18 points from the opening 13 matches and even if they lose this clash they will finish this season in top-two position. Only concern for Gujarat side is their captain Hardik Pandya’s worrying form, who has failed to take any wicket in his last 6 matches and scored just 56 runs as well.

The temperature is expected to hover around 31°C on the match-day with 79% humidity and 11 km/h wind speed. There are 5% chances of precipitation during the game.

Wankhede pitch has been little helpful towards bowlers in the later stages of this IPL season. With only three matches scheduled here, we can expect bowlers continue to dominate and its very unlikely to witness an inning above an average score of 170 runs.

Gujarat Titans registered a very big win against 1st placed Lucknow Super Giants in the last match to become the first team to qualify for the playoffs this season. Chennai Super Kings suffered a heavy defeat against Mumbai Indians in their last match which ended their hopes to reach playoffs this season. Gujarat Titans defeated Chennai Super Kings by 3 wickets and with just 1 ball remaining in the first reverse fixture and are favorites to win again on Saturday afternoon.

The star Indian batter and former BLR skipper scored his only fifty of this season against tonight’s opponent in the first reverse fixture. He started off last match on appositive note with 20 runs and was unlucky to get caught on with ball slightly hitting the gloves. Kohli has scored 236 runs in 13 matches with an average of 19.66 and a strike rate of 113.46.

The veteran Indian wicket-keeper batter missed majority of the season due to Matthew Wade being first choice option with the gloves. But now Saha has cemented that role and is most consistent batter for the Titans this season. He scored unbeaten 67 runs against CSK in the last match. Saha has scored 281 runs in just 8 matches with an average of 40.14 and a strike rate of 123.24.

The star Sri Lankan leg-spinner is in direct race for the Purple Cap award this season with just 1 wicket behind leader Yuzvendra Chahal. He took 2 more wickets while conceding just 15 runs against PBKS in the last match. Hasaranga has taken 23 wickets in 13 matches with an average of 14.65 and an economy rate of 7.48 so far.

The experienced Indian pacer is in sensational form for the Titans this season with another big spell against champions Chennai Super Kings. He took 2 wickets for 19 runs against CSK in the last match and now leading most-wickets chart for GT. Shami has taken 18 wickets in 13 matches with an average of 21.61 and an economy rate of 7.62.