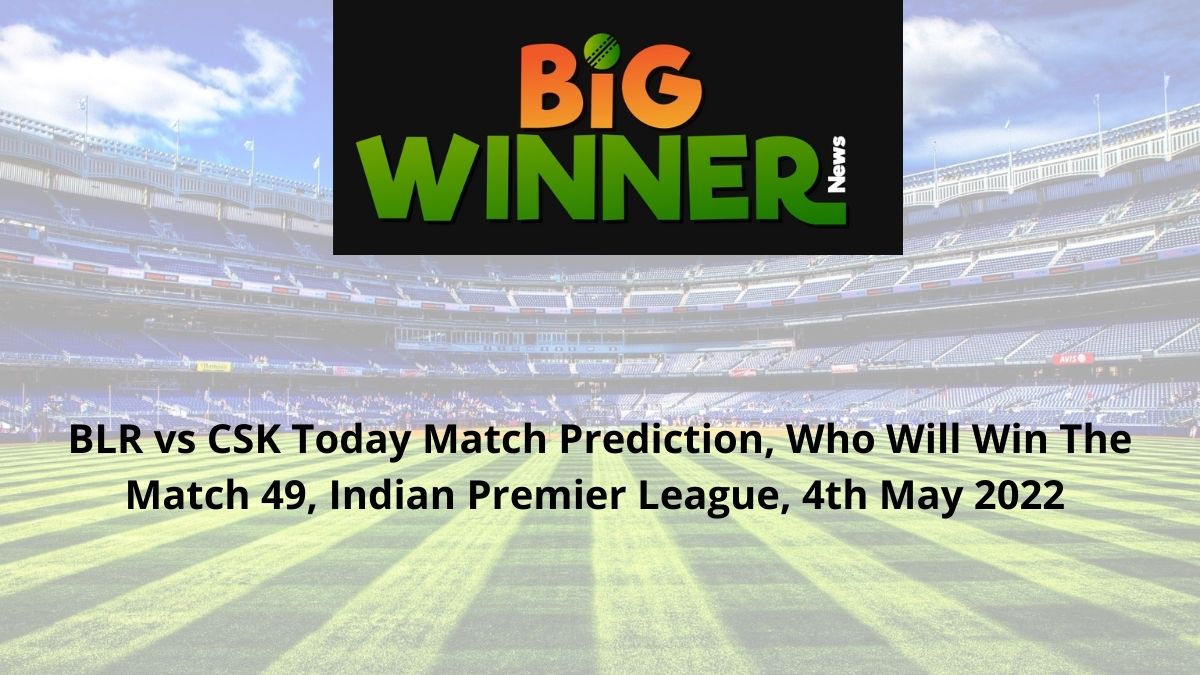 Our Experts bring you the finest today’s match prediction that you can trust. We are here for BLR vs CSK, Today Match Prediction, Match 49, Indian Premier League, Online Cricket Betting Tips, which will provide every user with a clear picture of which team and in what aspect they can place their bets.

Royal Challengers Bangalore started this season with consistent wins but now struggling for consistency with three consecutive defeats. They lost against Gujarat Titans by 6 wickets with just 3 balls remaining in the last match. Biggest positive from this clash was Virat Kohli scoring his first fifty of this season after 10 matches. Kohli return of form will be a big boost for BLR in their hope of finishing this season in top four position.

Bangalore side are now placed in 5th position in the league table with 10 points from the opening 10 matches.

Chennai Super Kings looked totally different when MS Dhoni captaining again in the last match with a big win over Sunrisers Hyderabad. They scored 202 runs while batting first, with Ruturaj Gaikwad missing his century by just one run and Devon Conway scoring unbeaten 85 runs on his return. Then Mukesh Choudhary took 4 wickets to restrict the Sunrisers to 189 runs and register third win of this season.

Chennai side are still placed in 9th place with 6 points from the opening 9 matches with 3 wins and 6 defeats.

The temperature is expected to hover around 34°C on the match-day with 55% humidity and 6 km/h wind speed. There is 1% chance of precipitation during the game.

MCA pitch is proving to be more helpful towards bowlers this season but we witnessed a big scoring clash in the last match. Chennai Super Kings scored 200 plus runs just two days ago with no movement from the ball in both innings.

Chennai Super Kings returned to winning ways with MS Dhoni taking reins in hand once again. Royal Challengers Bangalore lost their third consecutive match in the last fixture but are in better position than their rivals. Star Indian batsman Virat Kohli returned to form with a smashing fifty in the last match and that clearly makes BLR favorites to win this clash on Wednesday. But BLR lost the first reverse fixture against CSK this season and have won just once in last five meetings.

The former Indian captain scored his first fifty of this season in the last match against Gujarat Titans. Kohli returned to a form with 58 runs knock and now is tipped to continue his usual best in the remainder of matches. He has scored 186 runs in 10 matches with an average of 20.66 and a strike rate of 116.25.

The last season’s hero for CSK struggled for the runs early this season but has returned to his classic best in last few matches. He scored 99 runs off just 57 balls against Sunrisers Hyderabad in the last match. Gaikwad has scored 237 runs in 9 matches with an average of 26.33 and a strike rate of 136.20 so far.

The star Sri Lankan all-rounder cost BLR a lot of money in the mega-auction but the leg-spinner has already proved his worth with consistent good displays. He had 2 wickets against CSK in the first reverse fixture and took 2 more in the last match as well. Hasaranga is the leading most-wickets chart for BLR with 15 wickets in 10 matches with an average of 18.20 and an economy rate of 8.02.

Sri Lankan mystery spinner was excellent when he faced Royal Challengers Bangalore in the first reverse fixture this season. He took 4 wickets against BLR and won the man of the match award as well. Theekshana is also leading the best-economy bowling chart for his team with 8 wickets in 6 matches with an average of 22.62 and an economy rate of 7.54.