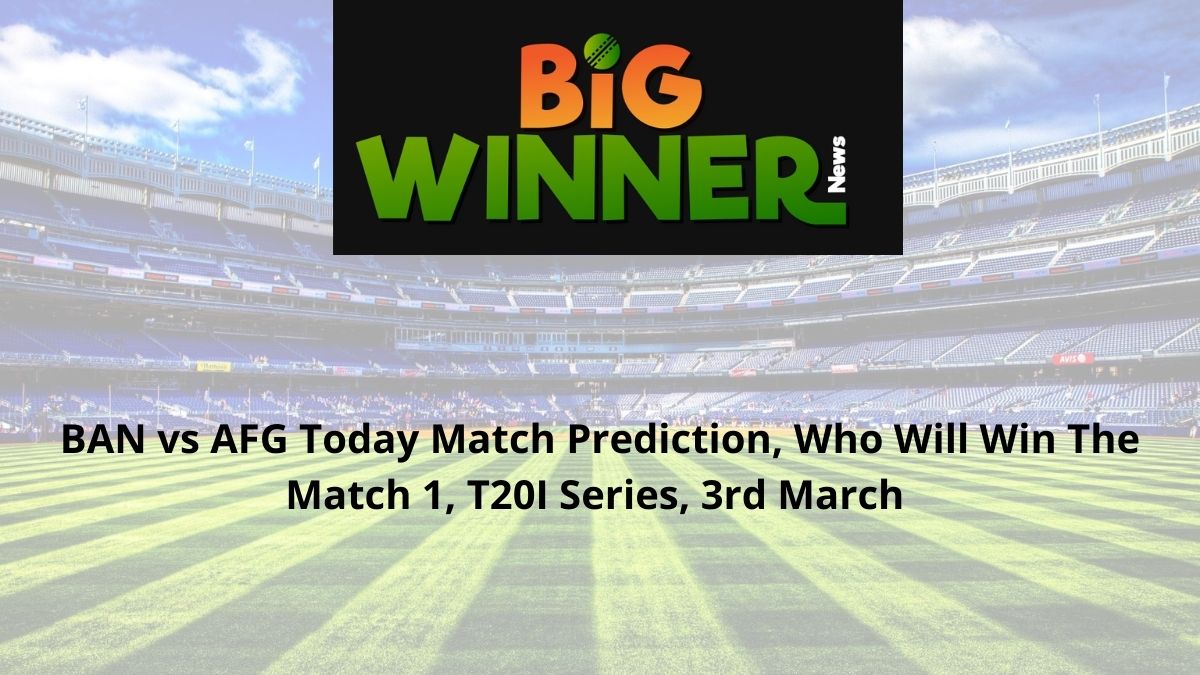 Our Experts bring you the finest today’s match prediction that you can trust. We are here for BAN vs AFG Today Match Prediction, Match 1, T20I Series, Online Cricket Betting Tips, which will provide every user with a clear picture of which team and in what aspect they can place their bets.

Bangladesh side rank 9th in the ICC T20I Team chart, which is a disappointing number for the fans. In players ranking, only Shakib Al Hasan ranks in top-ten charts but their recent ODI series win over Afghanistan will give them some boost going into this fixture. In their last T20I match, they lost to Pakistan by 5 wickets which resulted in 0-3 series lost in November 2021.

Afghanistan team rank 8th in the latest ICC T20I teams chart but have played much less games than others. This will be there first T20I match this year and they will be looking to restore their emergence once again. In the last T20I match they lost to New Zealand by 8 wickets in the World Cup last year.

The temperature is expected to hover around 30°C on the match-day with 41% humidity and 5 km/h wind speed. There is 1% chance of precipitation during the game.

Dhaka pitch is excellent for the spinners from the start and we have plenty of world-class leg-spinners playing in this match. Average score is below 140 runs, so toss will be crucial to select ball first.

Bangladesh are expected to win the first T20I match against Afghanistan

Only one points separate both teams in ICC T20I teams ranking but Afghanistan have played less than half match to all other top-ten teams. They have better record against Bangladeshi team in shortest form of cricket but home-advantage will be a key factor in this game. Bangladesh side have won just once in last 5 T20I matches against Afghanistan, which will give them a big morale boost onThursday.

The star all-rounder and former captain will be a key player for Bangladesh in the entire series. He failed to score big in recently won ODI series but ranks 2nd in ICC T20I all-rounders chart. Shakib Al Hasan has scored 1894 runs in 94 matches with an average of 22.8 and a strike rate of 120.5.

The experienced middle-order batsman scored two fifties in the ODI series against Bangladesh and bolsters thirty plus average in T20I format. Zadran has scored 1232 runs in 68 matches with an average of 33.3 and a strike rate of 141.3.

The 26-year-old left-arm pacer was not up to his best in the ODI series with just 4 wickets in 3 matches but still remains best bowler for the hosts. Mustafizur Rahman has taken 86 wickets in just 61 T20Is with an average of 19.5 and an economy rate of 7.63.

Star Afghanistan leg-spinner was excellent in the last ODI match against Bangladesh with 3 wickets and also shined in PSL 2022. Rashid Khan has taken 103 wickets in just 56 T20Is with an average of 12.7 and an economy rate of 6.20.