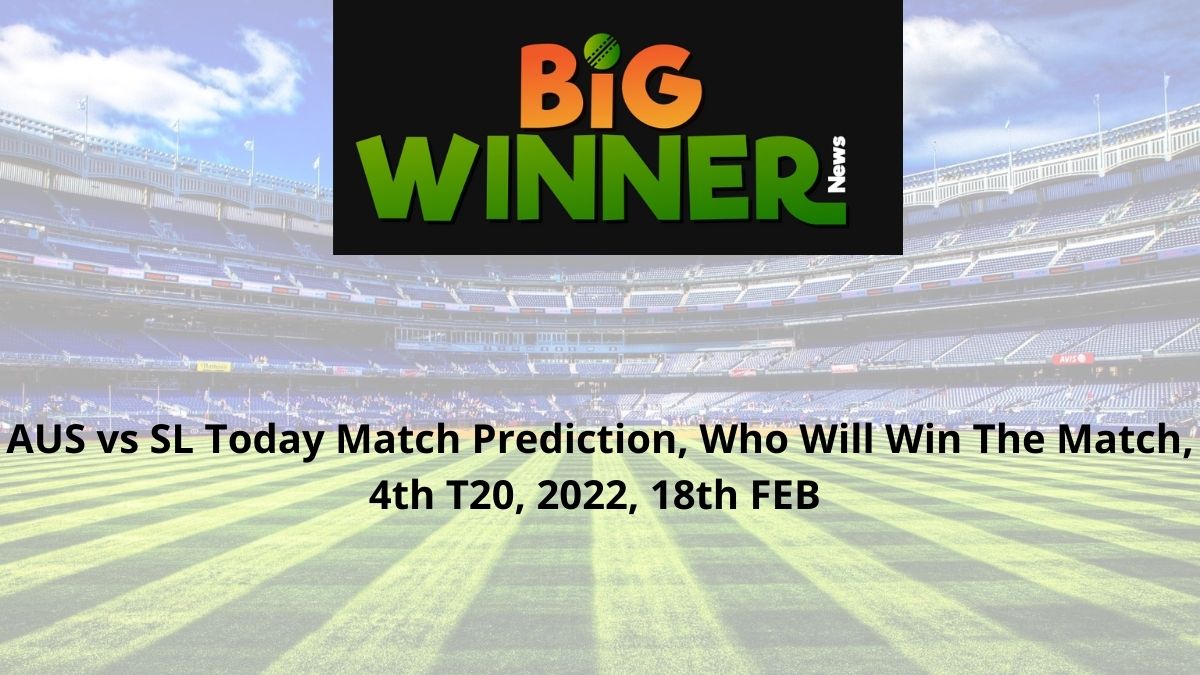 Our Experts bring you the finest today’s match prediction that you can trust. We are here for AUS vs SL Today Match Prediction, Match 4, T20 Series, Online Cricket Betting Tips, which will provide every user with a clear picture of which team and in what aspect they can place their bets.

Australian side continue to dominate t20i format as well with their first series win after lifting T20 World Cup last year. They will be looking for white-wash this series with two more wins in the next two matches but will rest key players for this match. They rank 6th in the ICC t20i team’s rankings and this series win definitely boost up their points.

Sri Lanka showed great fighting spirit in the second match but once again batting order failed in the third match which resulted in series loss. In another blow, they have lost key spinner Wanindu Hasaranga for the last two matches and it will definitely reflect the results.

The temperature is expected to hover around 21°C on the match-day with 55% humidity and 16 km/h wind speed. There are 01% chances of precipitation during the game.

Melbourne pitch has been great for the pacers in the past and Australian pacers are already dominating this series. Batsmen have little chance while batting second so Sri Lanka will be looking to ball first if they win the toss on Friday.

Australian side sealed this series as expected with 2 matches remaining. It was a one-sided affair in the third match after a super-over thriller in the 2nd match. Australia are expected to overhaul squad for the last two matches and Sri Lanka will be looking for a consolation win nothing to lose attitude on Friday.

The right-handed batsmen dropped to middle order due to the inclusion of Ashton Agar in the top-order. But once again Inglis finished the match with 21 runs not out knock to seal the series. Inglis has scored 92 runs in 3 matches with an average of 46.00 and a strike rate of 135.29 in this series.

The rising Sri Lankan youngster is having an excellent series despite his team’s struggles. Nissanka ranks the most-runs charts ahead of big names from the both teams and will be looking to contribute more in the remaining two matches. Nissanka has scored 125 runs in the 3 matches with an average of 41.66 and a strike rate of 112.61 in this series.

Experienced Aussie pacer has dominated this series with wickets in every matches and now he leads most-wickets charts in this series. Hazlewood remains only player to rank in ICC top-ten bowlers of every format of this game. He has taken 8 wickets in just 3 matches with an average of 8.12 and an economy rate of 5.41 in this series.

The 21-year-old off-break spinner showed his quality in the last match with 3 wonderful and important wickets. Theekshana now has taken 4 wickets in 3 matches with an average of 20.50 and an economy rate of 7.45 in this series. With key spinner Wanindu Hasaranga ruled out of the remaining matches, Theekshana will play as key spinner in the next two matches.