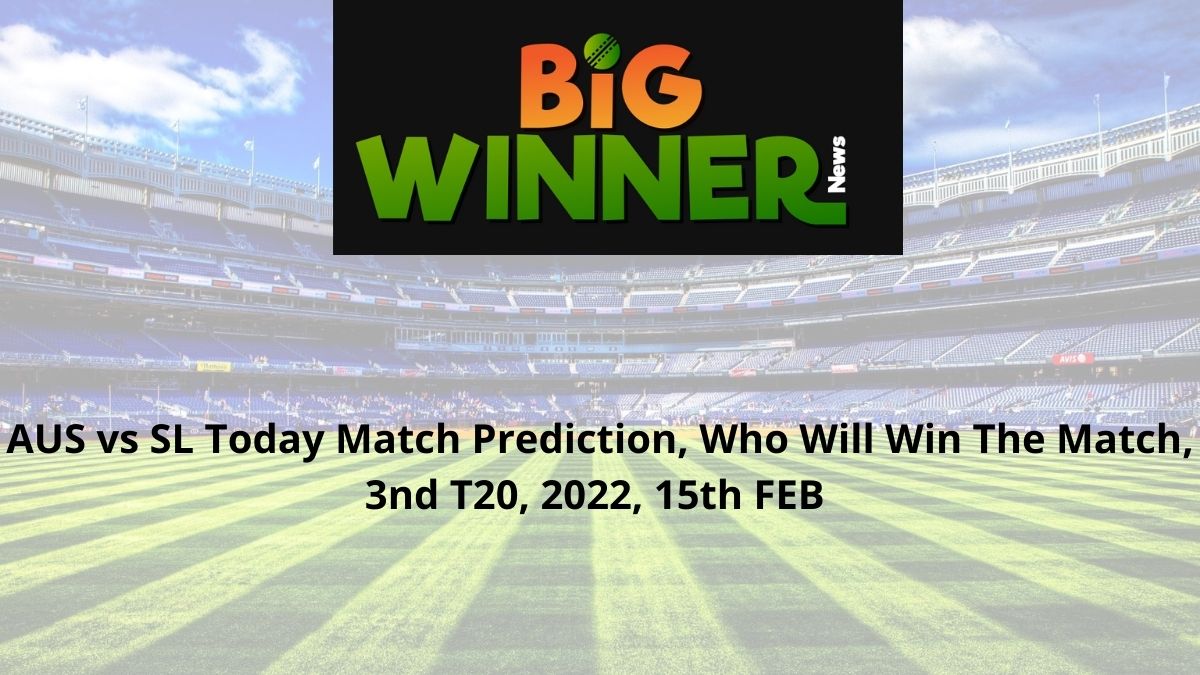 Our Experts bring you the finest today’s match prediction that you can trust. We are here for AUS vs SL Today Match Prediction, Match 3, T20 Series, Online Cricket Betting Tips, which will provide every user with a clear picture of which team and in what aspect they can place their bets.

Australian side are dominating t20 format of cricket as well after winning t20 World Cup last year. But they rank 6th in the ICC rankings and a series win will surely boost up their position. They were expected to dominate this series with big wins against the struggling Sri Lankan side but the hosts needed rain in the first match and a super-over in the second match.

Australia lost their star batsman Steve Smith for the remaining three matches after suffering a concussion while saving boundary in the last match. Cricket Australia decided not to select a replacement for Smith, which came as surprise for the fans.

Sri Lanka was fortunate in the last match after an excellent display while chasing big target of 165 runs. Captain Dasun Shanaka played a brilliant knock of 34 runs in the end after Nissanka scored 73 runs while opening. But Josh Hazlewood, once again, fade away from their efforts by taking 3 wickets and giving away just 5 runs in the super-over. The Sri Lankan side will be optimistic on Tuesday as they need a win at any cost to remain alive in this series.

The temperature is expected to hover around 28°C on the match-day with 74% humidity and 17 km/h wind speed. There are 05% chances of precipitation during the game.

Manuka Oval pitch is always helpful for the bowlers, specifically to pacers. Pitch has extra bounce and ball swings both ways on this slow pitch. Average first inning score on this pitch is just 150 runs and 120 runs while chasing, so the toss will be key for both the captains on Tuesday evening.

Australian side continues to dominate t20 cricket since they left T20 World Cup last year. Sri Lanka has lost the first two matches in this 5-match series and needs a win on Tuesday at any cost. They showed good fighting spirit in the last match after chasing down 164 scores but lost in super over. In the first match, they lost by 20 runs due to the rain but managed to restrict the hosts below 150 runs. The in-form players Wanindu Hasaranga and Pathum Nissanka will be key for them in this possible series decider clash but odds are with the Australian side due to their strong fast-bowling unit.

The right-handed opening batsman is enjoying a good debut series with Australia and has scored mots runs for the hosts. Inglis scored a 48 runs knock in the last match and has scored a total of 71 runs in 2 matches with an average of 35.50 and a strike rate of 142.0

The young opening batsman continues to grow as best batsman for the Sri Lankan team and is leading most-runs charts in this series. Nissanka has already cemented his place in the test team and now looks like he is indispensable quality for the Asian side. He has scored 109 runs in 2 matches with an average of 54.50 and a strike rate of 121.11 in this series.

Experienced Aussie pacer was the hero in the last match as he conceded only 5 runs in the super over to guide the hosts to deserving win. Hazlewood is leading with most-wickets charts with 7 wickets in just 2 matches with an average of 4.85 and an economy rate of 4.25.

Wanindu Hasaranga took two important wickets of settled pair Aaron Finch and Josh Inglis in the last match. Hasaranga is ranked as no.1 bowler in the ICC rankings and living up to his stature in this series. He has taken 5 wickets in 2 matches with an average of 14.20 and an economy rate of 8.87 so far.